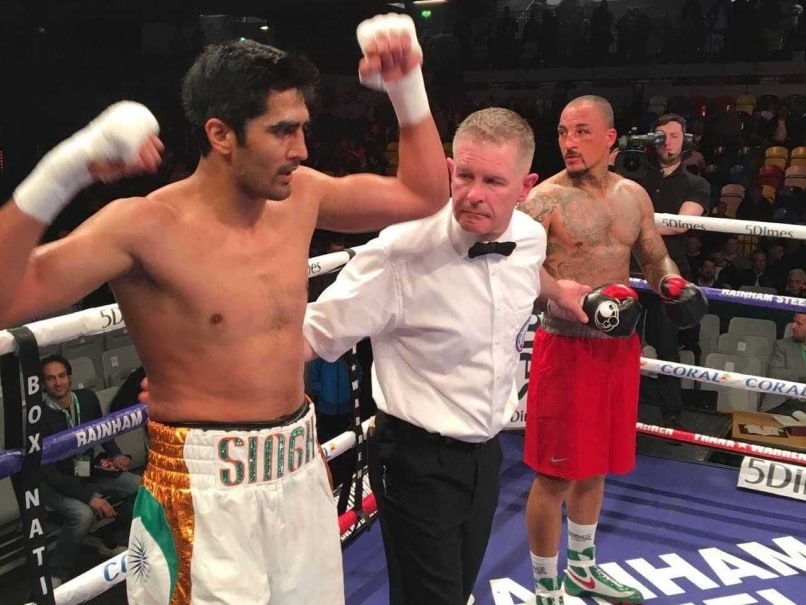 Vijender was declared winner little over a minute into the fifth round of the six-round super middleweight contest, which was incidentally his longest bout so far.

The 30-year-old was up against his most experienced rival till date in Royer, who came into the bout with an accumulated 250 rounds under his belt.

But the Indian did not seem perturbed in the six-round contest and was once again looking to wrap it up early like his previous bouts.

Vijender spent the first round getting a measure of his overtly cautious rival, who preferred to keep a shell guard and hardly attempted a hit at his taller opponent.

But that could not save him from a couple of telling body blows from Vijender, who was also impressive with his jabs.

The Frenchman was reluctant to let go of the guard even in the second round and Vijender took it upon himself to go on the offensive.

The Indian seemed set for an early finish when he had Royer cornered with a flurry of combination punches but the Frenchman did not give in despite being left with a bloodied face owing to a cut above the left eye.

To Royer's credit, he withstood the onslaught and even tried to attack the dominant Indian but that was hardly enough to stop Vijender's march to victory.

Royer's determination finally broke in the fifth round after an unrelenting Vijender brought him to his knees with an onslaught of body blows.

The 29-year-old Frenchman could not continue after that because of his bloodied eye, giving Vijender yet another dominant victory.

Vijender will next be seen in action on May 13 in Bolton against a yet-to-be-decided opponent.

"I am happy with my fifth knockout win in a row. Facing an experienced boxer was not that easy for me but I played as per my basics and tried some new punches which helped me to win against Matiouze Royer," said India's first Olympic and World Championships medallist.

"The best part is that I started attacking Matiouze Royer from the starting of first round and my confidence level was gone up. With this win my morale is really up and I am confident of doing well in all future fights. My amateur experience is helping me but pro is totally different game, so I am looking forward to my next bout on 13 May before the WBO Asia Title fight in India," he added.

The Haryana-lad also lauded his rival for his grit.

"He showed he is a good fighter and I respect him for how he performed. But today, I was able to execute my plans better," he said.