British boxer Amir Khan, who recently announced his plans for boxing academies in India and Pakistan, said he is keen on fighting India's Vijender, who is undefeated since turning pro last year 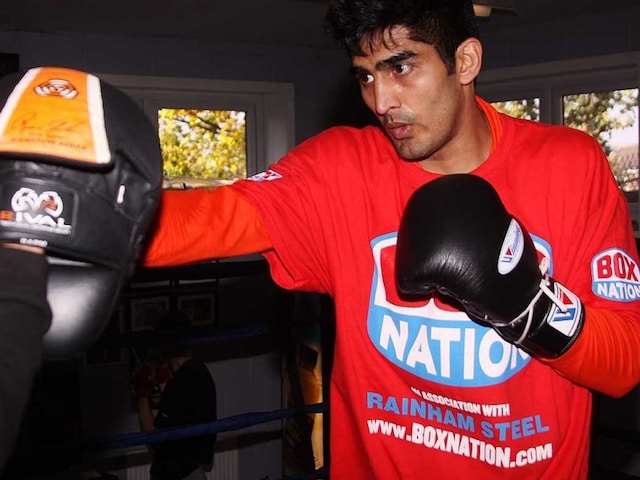 Vijender Singh, who started pro boxing last year, has only four bouts under his belt whereas Amir Khan has 34 bouts to his credit.© NDTV

Indian boxing star Vijender Singh is ready to trade blows with British professional Amir Khan and accepted the Briton's challenge to fight in India, saying it will be a big boost to the sport in the country.

Commenting on Amir Khan's challenge, Vijender said: "I accept the challenge of Amir Khan and I am sure this fight will be a big boost to boxing in our country.

"As we both fight in different weight categories so will have to see whether Amir gains or I have to lose weight. I have started my professional boxing career last year only and have made only four appearances in the pro ring.

"It might take me just one more year when I will be ready to fight against Amir Khan. I am sure this fight will attract international limelight and attention. Currently, I am focusing on my next fight scheduled for April 30 against Matiouze Royer at Copper Box Arena," he added.

However, a fight between Vijender and Amir is at least a year or two away as the Indian boxer has just started his pro boxing career last year and has only four bouts under his belt whereas Amir has 34 bouts to his credit.

"Of course a fight is definitely possible but may be next year or 2018. Either Amir has to gain weight or Vijender needs to lose some. For Amir with his body structure I am not sure whether he can. Ditto Vijender. Thus, it is very much possible, but the technicalities exist."