Floyd Mayweather will fight a Japanese kickboxer half his age, Tenshin Nasukawa, on New Year's Eve in Saitama. 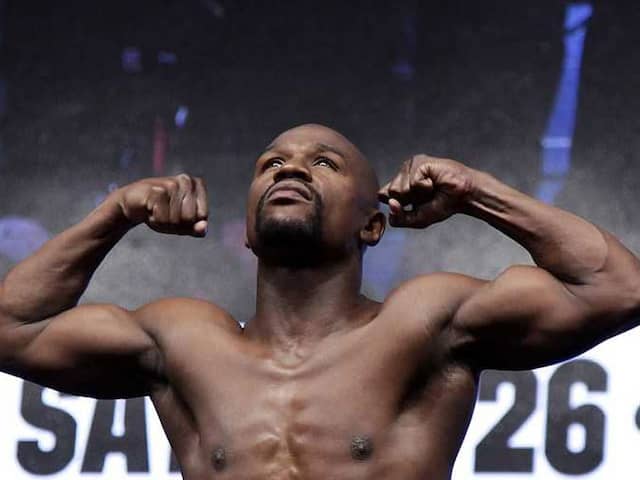 Boxing superstar Floyd Mayweather Jr on Monday said he will come out of retirement to fight a Japanese kickboxer half his age, Tenshin Nasukawa, on New Year's Eve in Saitama. The 41-year-old unbeaten American, who won world titles in five different weight divisions and was considered the best pound-for-pound boxer in the sport, out-boxed Irish mixed martial arts fighter Conor McGregor in his last fight in August 2017. That victory improved his boxing record to a perfect 50-0, but the format or rules for his meeting with the baby-faced Nasukawa were not specified by the Japanese mixed martial arts promoters RIZIN.

Mayweather posted a teaser photo on his Instagram feed at the weekend, showing him wearing kickboxing gloves.

"I want to give the people what they want -- blood, sweat and tears," Mayweather told a news conference in Tokyo after reportedly flying into Japan on his private jet.

"It's always been a goal of mine to go outside out of the US and display my talent. The world has never seen Mayweather compete live in (Japan)," he added, promoting the cross-code bout as an expansion of his businesses to the Far East.

"I want to continue to build my relationship with Money Team Tokyo. We've been making some huge fights happen in the US, but we look forward to taking the Mayweather Promotions banner and the TMT banner worldwide."

Nasukawa, who is described in the press release as "perhaps the best combat sports prospect (Japan) has ever seen", boasts a 27-0 record but has never competed as a professional boxer.

The 20-year-old with a bleached-blond quiff called it an "easy decision" to accept the offer to face Mayweather in Saitama, north of Tokyo.

"It was a surprise offer but I accepted without hesitation," said Nasukawa.

"I don't care what the rules are. I want to be the man who changes history. I'll do that with these fists, with one punch -- just watch."

Mayweather insisted Nasukawa would be no pushover.

"He's young and he's undefeated so it's obvious he's doing something right," he said.

"This kid right here is an unbelievable talent, he looks like a gym rat," added Mayweather.

"He's very special, he's fast, he's strong. I'm older now and when it comes to experience, I have it on my side. He has youth on his side and he's going to bring a lot of excitement."

Mayweather, who stopped McGregor in the 10th round last year after coming out of retirement for a $275 million pay day, had been flirting with the idea of a rematch with the Irishman or facing McGregor's recent MMA conqueror, the fearsome Russian Khabib Nurmagomedov.

"I've been blessed to be in the sport a long time and to make over a billion dollars in the sport," added Mayweather.

"But this particular bout is special as far as giving people something they've never seen before.

"I'm not really worried about the weight class or rules -- it's about me displaying my skills against another skilful fighter. I just want to entertain."