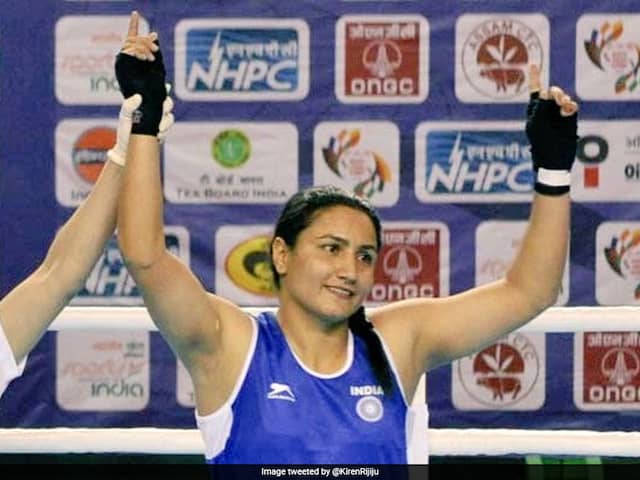 Five Indian boxers, including the seasoned duo of Vikas Krishan (69kg) and Pooja Rani (75kg), secured Tokyo Olympic berths on Sunday by advancing to the semifinals of the Asian Qualifiers with contrasting quarterfinal victories here. Satish Kumar, Rani, Krishan (69kg), Lovlina Borgohain (69kg) and Ashish Kumar (75kg) became the first set of Indian boxers to qualify for the showpiece scheduled in July-August this year. While fourth-seeded Rani notched up a facile 5-0 win over Thailand's Pornnipa Chutee, Krishan endured a tough one against third-seeded Japanese Sewonrets Okazawa before also prevailing in a unanimous verdict against the Asian silver-medallist. In the evening session, two-time world bronze-winner and second seed Borgohain eased past Uzbekistan's Maftunakhon Melieva to enter the semifinals.

Also through to the last-four stage was Asian silver-medallist Kumar with a 5-0 win over Indonesia's Maikhel Roberrd Muskita, the bout being tougher than what the final scoreline might suggest.

"I managed to execute whatever I had planned. I wanted to fight from a distance and counter-attack, which I could do. Just qualifying is not enough, I want to now win a gold medal," a jubilant Borgohain, who hails from Assam, said after her bout.

However, first-timer Sachin Kumar (81kg) went down in a split decision to China's national champion Daxaing Chen in his quarterfinal bout. But he remains in the hunt for an Olympic berth if he can win the two-bout box-off between the losing quarterfinalists.

The top five boxers in his category will get a spot in the Tokyo Games. While Rani, Borgohain and Kumar secured their maiden Olympic spots, Krishan will be making his third successive appearance at the quadrennial showpiece, scheduled in July-August.

"I had never fought against this girl before today and honestly, I was a bit scared. I had told my coaches about it before the bout. They instilled confidence in me and I could pull off a one-sided result. I am happy," said the 29-year-old Rani, who fought career-threatening shoulder and hand injuries before her gold at last year's Asian Championships.

Rani will next face the reigning world and Asian champion Li Qian of China, who has the top billing in the 75kg category. Qian had no trouble beating Mongolia's Myagmarjargal Munkhbat 5-0 in the opening bout of the day.

The Indian is a three-time Asian medallist besides being a bronze-winner at the 2014 Asian Games. Krishan, however, had to slog hard against a brilliant boxer, whose performance was eye-catching despite the loss. Okazawa, a gold-winner at the Olympic Test Event last year, kept Krishan on his toes and his right jabs were particularly effective.

What worked for the Indian was consistent straight punches to the body, which fetched him the bulk of the points.

Awaiting Krishan in the semifinals is second-seeded Ablaikhan Zhussupov of Kazakhstan, a two-time world bronze-medallist and a former Asian silver-winner. Zhussupov defeated Thailand's Wuttichai Masuk in a unanimous verdict.

Krishan is making a comeback in the amateur fold after taking the professional plunge after the 2016 Rio Olympics. He had an unbeaten run in the circuit before a back injury changed his plans. Upon his return to the amateur boxing last year, he won a gold medal at the South Asian Games in December. Later, Sachin was out-scored by Chen, a taller man who found his range after trailing in the opening round.

Using his telescopic range, Chen managed to connect some clean straights while Kumar paid dearly for holding back too much after dominating the first round.

In the evening session, Borgohain and Kumar continued the rampaging run. While Borgohain dominated all through, Kumar found his bearings after a competitive opening round against Muskita.

Next up for Kumar is top seed and reigning world silver-medallist Eumir Marcial.