In a near-perfect display of his trademark defensive game, Vikas Krishan was consistently impressive. 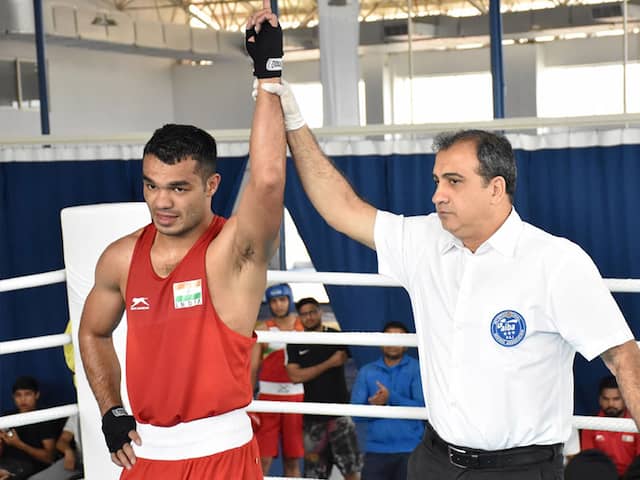 Commonwealth Games gold-medallist Vikas Krishan (69kg) entered the quarterfinals of the Asian Olympic Qualifiers of boxing with a thumping win over Kyrgyzstan's Nursultan Mamataly in Amman on Friday. Krishan clinched a 5-0 triumph to make the last eight stage, where he will square off against third seed and Asian silver-medallist Sewonrets Okazawa of Japan. Okazawa, who won a gold medal at last year's Olympic test event in Tokyo, defeated Taiwan's Pan Hung-Ming in his pre-quarterfinal bout. Krishan came into the event after claiming a gold medal at the South Asian Games in December last year. The SAG was his first amateur event after an undefeated stint in the professional circuit.

In a near-perfect display of his trademark defensive game, Krishan was consistently impressive. The Indian slowly built up the tempo and struck a particularly hard right hook in the second round to assert his dominance. The Kyrgyz boxer was left quite frustrated by Krishan's control over the proceedings.

Earlier, Sachin Kumar (81kg) advanced to the quarterfinals after notching up a comprehensive 5-0 win over Samoa's Dee Iaopo. A semifinal berth in the ongoing event would assure the competing boxers of a spot in this year's Tokyo Olympics.

Six-time world champion Mary Kom, who has been seeded second, will face New Zealand's Tasmyn Benny in her opening bout. Panghal, an Asian Games and Asian Championships gold-medallist, will start his campaign against Mongolia's Enkhmanadakh Kharkhuu after getting a first-round bye.

Mirzakhalilov is a reigning world champion besides being a gold medal winner at the Asian Games and the Asian Championships.