Mary Kom is now assured of at least a bronze medal in the AIBA Women's World Boxing Championships 2018. 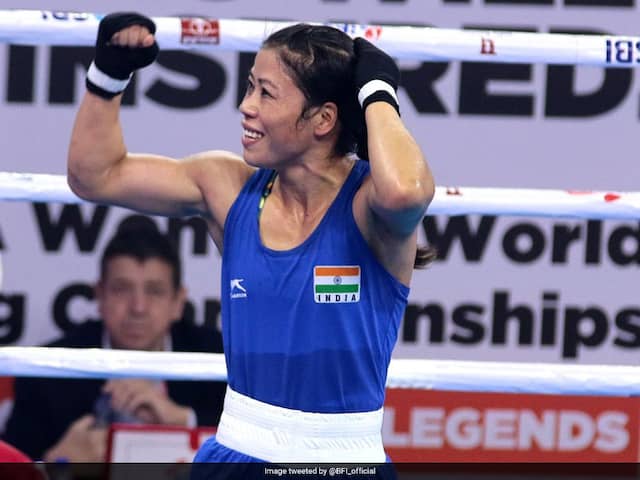 Five-time world champion MC Mary Kom defeated China's Wu Yu in the light flyweight (48kg) to enter the semi-finals. The 35-year-old mother of three defeated Wu Yu 5-0 and is assured of at least a bronze. Mary Kom entered the event with a remarkable tally of five gold medals and a silver to her credit. She last won a world championship medal in 2010 -- a 48 kg category gold. In the other bouts of the day, India's Lovlina Borgohain defeated Kaye Scott of Australia in the quarterfinal to enter the semis. She will face Taiwanese Nien-Chin Chen in the final-four round.

Sonia, on the other hand, defeated Colombia's Yeni M Yeni M Castenada 4:1 to book her berth at the semis.

India had its reverses, too, when Manisha Moun, Bhagyabati Kachari, Pinki Rani Jangra and Seema Pooina made their exits after failing to overcome early jitters.

"It was a tough bout. Not very tough but not very easy also. There are a lot of good Chinese boxers who keep coming. I have faced a lot of them but this opponent I have not faced earlier," Mary Kom said after her bout.

"But once I got her game I thought out what to do and I had not much of a problem after that," she added. The Olympic bronze-medallist next faces North Korea's Kim Hyang Mi in the semi-final on Thursday.

The Indian had beaten Kim in the Asian Championships last year.

"So, I am confident of winning but not overconfident," she added.

In a bout which saw little action, Mary Kom was the better boxer with clean punches.

More importantly, the local favourite rarely allowed Wu to get a clean shot at her.

Mary Kom was tied with Irish legend Katie Taylor on the number of medals won before this edition.

But with Tuesday's win, the Manipuri became the most successful boxer in the marquee tournament. Taylor now plies her trade in the professional circuit.