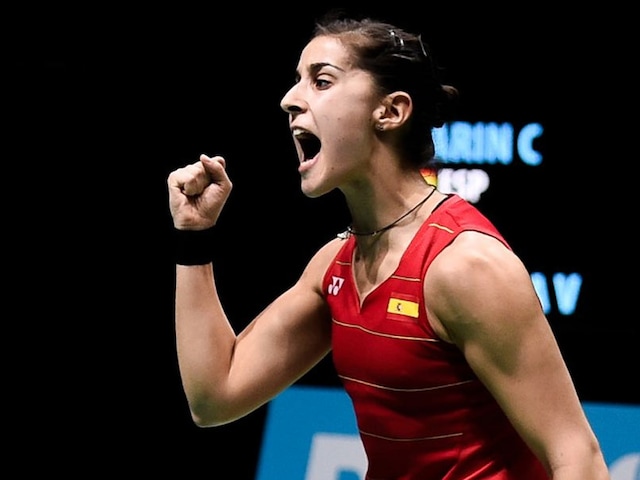 Carolina Marin had to dig deep for her win over Ashwini Ponnappa.© AFP

With Hyderabad trailing 2-3 before the final match of the evening, all their hopes were pinned on their trump match, where Marin was expected to ease to victory against Ponnappa.

However, the Spaniard had to dig deep for the win as Ponnappa put on a superb display to take the match to three games.

Hyderabad move to third in the points table following the win.

Danish player Viktor Axelsen, the current world Number two, won the crucial trump match 11-5, 11-6 against Sai Praneeth of Hyderabad to help Bengaluru to take 2-1 lead in the tie, but men's doubles pair Tan Boon and Tan Wee brought Hyderabad into reckoning by winning the crucial game 11-5, 11-8, pushing the game into the super game, which saw Ponappa take on the mighty Marin.

After Axelsen won the trump match, it was up to Bengaluru men's doubles pair, Hyun and Yeon Seong,  to win the crucial match against Tan Boon and Tan Wee to seal the tie in their favor.

Axelsen showed his class by going into the break leading 6-2 against Hyderabad's Sai Praneeth, and then bagging the first game 11-6 after taking full advantage of his height, which gives him power to smash the "bird" hard, giving hardly any chance for the opponents to return.

The Dane started well in the second game also by taking 6-2 lead over Sai Praneeth into the break. Going ahead, Axelsen created some great angles and bagged the game 11-5.

However, Bengaluru started of badly by losing the first tie to Hyderabad 8-11 and 7-11, when Sameer Verma trounced Boonsak Ponsana in the men's singles. The sensational Verma took the opening game 11-8 against Boonsak, giving a great start for Hyderabad.

Verma started with a bang by winning six points on the trot as he showed his prowess in style.

Down 0-7, Boonsak came back by winning six points, by taking the score to 6-8, but conceded next three points to make way for Verma to pocket his first game, but not before pulling off one point.

Boonsak, however, had a much better start in the second game after he took an early lead 4-3 against Verma, but the Indian shuttler came back and raced past 6-5 into the break.

After the break, Verma did not allow Boonsak to win any points, but only one, before pulling of the first tie of the night for Hyderabad.

Comments
Topics mentioned in this article
Badminton Carolina Marin Ashwini Ponnappa Sameer Verma Viktor Axelsen
Get the latest updates on IPL 2020, check out the IPL Schedule for 2020 and Indian Premier League (IPL) Cricket live score . Like us on Facebook or follow us on Twitter for more sports updates. You can also download the NDTV Cricket app for Android or iOS.