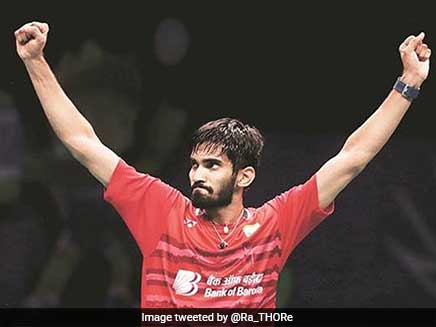 Badminton player Kidambi Srikanth on Thursday climbed to fourth position in the BWF rankings, which he achieved after his victory in the Denmark Open final held on Sunday. According to the official rankings, Srikanth jumped four places with 66,923 points to occupy fourth place behind China's Lin Dan. Denmark's Viktor Axelsen still holds the numero uno status, while Korea's Son Wan Ho is at No.2 spot. Srikanth is now just one spot away from matching his career-best ranking of third, which he attained in 2015.

HS Prannoy, who lost in the quarterfinal of the Denmark Open Superseries Premier, also jumped two spots to be placed at his career-best 12th place. His compatriot Sameer Verma is ranked 18th while Ajay Jayaram fell two places in the rankings to occupy 23rd position.

In the women's rankings, despite getting knocked out in the first round of the Denmark Open, PV Sindhu continues to be at No.2 spot. Saina Nehwal bettered her position from 12th to 11th in the rankings released on Thursday.

The Indians are currently playing French Open Superseries. Sindhu, Saina, Srikanth and Prannoy crossed the first hurdle and advanced to the second round of the USD 325,000 prize money event.

Srikanth, who had clinched his third title of the season at Denmark Open Super Series premier last week, emerged victorious after his opponent Germany's Fabian Roth retired at 0-3 in the opening game.

Srikanth will face Hong Kong's Wong Wing Ki Vincent, whom he had beaten in straight games last week en route to his title.

Sindhu, who also has been in good form this season with two titles and a silver at the World Championship, saw off Spain's Beatriz Corrales 21-19, 21-18 to set up a clash with Japan's Sayaka Takahashi.

Comments
Topics mentioned in this article
Kidambi Srikanth PV Sindhu Saina Nehwal Sameer Verma Ajay Jayaram Badminton
Get the latest Cricket news, check out the India cricket schedule, Cricket live score . Like us on Facebook or follow us on Twitter for more sports updates. You can also download the NDTV Cricket app for Android or iOS.