All England Open: Kidambi Srikanth was knocked out of men's singles in the tournament after losing to Ireland's Nhat Nguyen 21-11, 15-21, 21-12 on Wednesday. 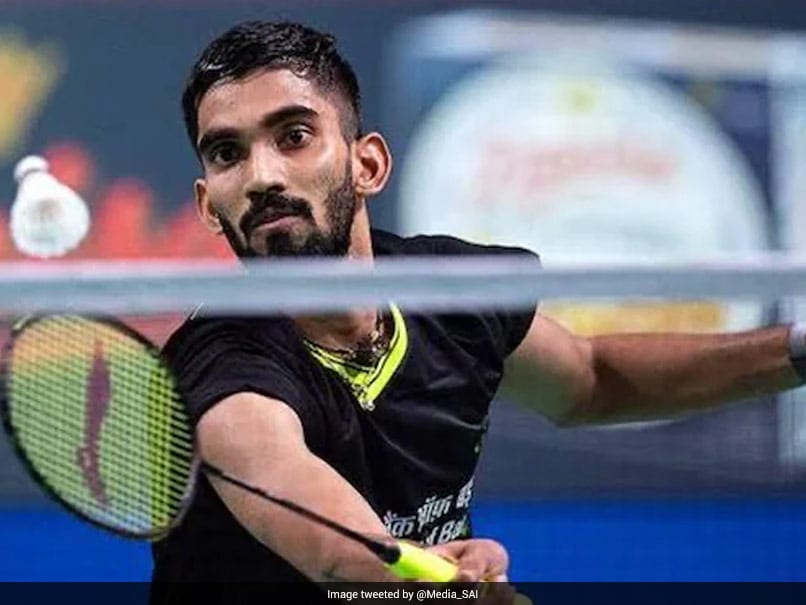 Kidambi Srikanth was knocked out in the first round of All England Open Championship.© SAI Media/Twitter

India's Kidambi Srikanth was knocked out of men's singles in the All England Open Badminton Championships after losing to Thailand's Nhat Nguyen 21-10, 15-21, 21-12.Saina Nehwal exited the All England Open Badminton Championships 2021 after retiring hurt against Denmark's Mia Blichfeldt. Olympic medallist, Nehwal was trailing 21-8, 10-4 against Mia Blichfeldt of Denmark when she retired hurt. There was some good news as PV Sindhu sailed into the next round, with a comfortable 21-17, 21-11 win over Malaysia's Soniia Cheah

Srikanth began the match losing the first game but came back strongly in the second. He gave a neck-to-neck fight to Nguyen in the first half of the third game but eventually lost to the 20-year-old from Ireland. Nguyen raced away to a lead after a close start before he clinched the first game 21-10. Srikanth trailed in the second game as well but came back in the second half to draw level with the Irish. However, Srikanth's game fizzled out towards the end as India suffered their first elimination in the prestigious tournament.

Parupalli Kashyap was also knocked out of men's singles in the tournament after losing to World No. 1 Kento Momota 21-13, 22-20.

India's challenge continues in the tournament with Saina Nehwal and PV Sindhu in action on Wednesday.

Earlier, India coach Mathias Boe said all Indian players have tested negative for COVID-19 and they are ready to participate in the tournament.

On Tuesday it was reported that three players and one member of the support staff had tested positive for the virus.

"No positive tests in the team anyone. We are ready for All England," Mathias wrote in his Instagram story.

The start of the tournament was delayed on Wednesday following inconclusive results of several players tested for the coronavirus.

Nehwal wasn't pleased with the delay in test results and complained about a lack of match practice ahead of the tournament.

"Ok, I have to do this now! Matches are starting tomorrow at the @YonexAllEngland and still no reports of the Covid test done 30hrs before. No practice, no gym .. for 2 days now," Nehwal had tweeted on Tuesday.

Comments
Topics mentioned in this article
Kidambi Srikanth Badminton Parupalli Kashyap Saina Nehwal PV Sindhu
Get the latest updates on SA vs IND 2021-22, check out the Schedule and Live Score . Like us on Facebook or follow us on Twitter for more sports updates. You can also download the NDTV Cricket app for Android or iOS.