Paes and Elena Vesnina overcame a stiff resistance from unseeded team of Pakistan's Aisam-Ul-Haq Qureshi and Sofia Arvidsson of Sweden in the first round. 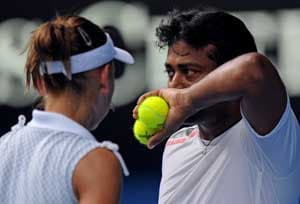 It turned to be a good day for India at the Australian Open as veteran Mahesh Bhupathi entered the men's doubles third round while Leander Paes and Rohan Bopanna progressed to the mixed doubles second round with their respective partners.

Paes and Elena Vesnina overcame a stiff resistance from unseeded team of Pakistan's Aisam-Ul-Haq Qureshi and Sofia Arvidsson of Sweden in the first round.

The second seeded Indo-Russian pair came from behind to edge past the unseeded rivals 6-7 (8) 6-4 10-7 in one hour and 48 minutes contest.

They next take on Australian pair of Jarmila Gajdosova and Matthew Ebden.

Bopanna crashed out of the men's doubles but advanced to the second round of the mixed doubles.

The Indo-Taipei pair will now be up against the winner of the match between the Slovak-Italian duo of Daniela Hantuchova and Fabio Fognini and the Russian-American combine of Natalie Grandin and Rajeev Ram.

Comments
Topics mentioned in this article
Tennis Australian Open 2012 Australian Open 2014 Leander Paes
Get the latest Cricket news, check out the India cricket schedule, Cricket live score . Like us on Facebook or follow us on Twitter for more sports updates. You can also download the NDTV Cricket app for Android or iOS.