Yuki Bhambri made a good comeback after losing the first set but could not maintain the momentum against world number 153 opponent, losing 3-6 6-1 2-6 after one hour and 45 minutes. 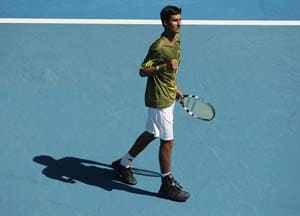 Yuki Bhambri failed to clear the first hurdle as he bowed out of the Australian Open qualifiers after losing the opening round match to 28th seed Italian Potito Starace, here on Wednesday.

The 21-year-old Indian youngster made a good comeback after losing the first set but could not maintain the momentum against world number 153 opponent, losing 3-6 6-1 2-6 after one hour and 45 minutes.

After making it an even affair with his second set win, Yuki could not cash in on the chances he got in the decisive third set as he squandered three of the four breakpoints and dropped his own serve thrice.

However, Yuki is set to make his Grand Slam debut as he will compete in the doubles event of the Australian Open with New Zealand partner Michael Venus, with whom he won the wild card play-off event in China.

Yuki had reached the singles semifinals in that event, where the winner was awarded a wild card entry into the Australian Open.

Comments
Topics mentioned in this article
Yuki Bhambri Divij Sharan Australian Open 2014 Tennis
Get the latest Cricket news, check out the India cricket schedule, Cricket live score . Like us on Facebook or follow us on Twitter for more sports updates. You can also download the NDTV Cricket app for Android or iOS.