Roger Federer, who was using the Brisbane tournament as an Australian Open warm-up for the first time, said he felt good ahead of his bid to win the year's first Grand Slam for the fifth time. 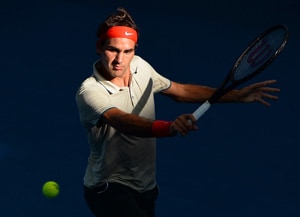 Swiss tennis great Roger Federer insisted on Sunday that his three-set loss to Lleyton Hewitt at the Brisbane International was not a setback to his Australian Open preparations. (Read: I can still win a Grand Slam, says Federer)

But Federer, who was using the Brisbane tournament as an Australian Open warm-up for the first time, said he felt good ahead of his bid to win the year's first Grand Slam for the fifth time.

"I feel pretty good, especially having played all the matches I have here now, with the doubles in particular," he said. "It's a good thing -- I didn't quite know what to expect from myself before the tournament. I played consistent, I must say."

The 32-year-old said he was not overly disappointed at his loss to Hewitt. "I didn't play great today, which is a bit unfortunate," he said.

Federer said his body had held up well, despite the amount of tennis he played and the heat in Brisbane during the week. "I'm pretty pleased just that my body is holding up good in the first week, because you don't quite know what to expect," he said.

"So overall there were many good things (this week), but then also a couple of things you need to just readjust maybe, and also get to Melbourne and see what the court speed is down there and then you'll have a real good idea of what you need to work on."

He would not make any predictions on how he would perform in Melbourne. "I haven't thought about it a whole lot," he said. "I think I can play very well. It depends on how I play more than anything right now. I think I was able to sort of serve better overall, more consistent this week than I have in a long time. So that's very good."