Serena Williams cemented her dominance of the sport with 11 titles last year, including the US and French Opens. 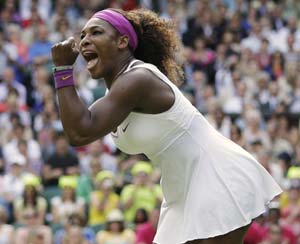 Serena Williams is gunning to match Chris Evert and Martina Navratilova by winning an 18th Grand Slam title at the Australian Open, with her blistering form suggesting she can reach the milestone.

The world number one cemented her dominance of the sport with 11 titles last year, including the US and French Opens.

And she picked up where she left off by winning the Brisbane International on Saturday, beating reigning Australian Open champion Victoria Azarenka in the final, with her powerful serve proving the difference.

Williams also beat world number three Maria Sharapova en route to the title -- the 58th of her remarkable career -- to ensure she enters the season-opening Grand Slam as red-hot favourite.

"It was a great test, it showed me where my level was, and I feel like I definitely have some room for improvement and things that I want to improve on going into Melbourne, and things I have to improve on if I want to win," she said in Brisbane.

Despite her rich vein of form, Williams, 32, is not taking an 18th Grand Slam title and sixth Australian Open crown for granted, knowing she needs to start from scratch at Melbourne Park next week.

But Czech-American great Navratilova believes Williams is not only poised to equal her career Grand Slam haul, but could even catch Steffi Graf's Open-era record of 22.

"If she can stay healthy there is no doubt she can go into the 20s. The sky is the limit," Navratilova said this week.

"I'm a perfectionist. I want to play better, I want to win," Azarenka said. 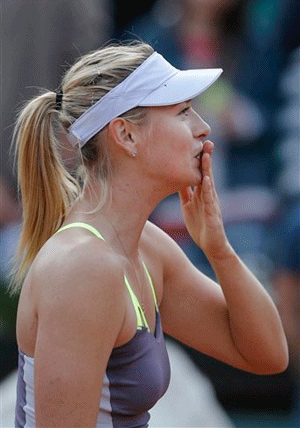 Sharapova is another former Melbourne winner searching for her next major title and she will be hoping to avoid Williams until the final, with the American having a 15-2 record over her long-time rival.

The glamorous Russian, now under coach Sven Groeneveld after a failed, one-tournament partnership with Jimmy Connors, endured a frustrating 2013 when a shoulder injury forced her off the tour in August.

But she made her comeback in Brisbane and said her enthusiam was as strong as ever.

"I've had a really healthy off-season, something quite unusual because in the last few years I always had a little injury here and there," she said in Brisbane.

"I know when I'm healthy how I can play and what I'm capable of doing. I needed to get healthy. So that was the motivation on its own."

Asia's lone Grand Slam singles champion is a crowd favourite in Melbourne, winning hearts in the final last year when she battled on despite twice going over on her ankle and banging her head so hard that she blacked out.

Other contenders include Agnieszka Radwanska, Petra Kvitova and even veteran Jelena Jankovic, a former world number one who believes she still has he game to unsettle Williams.

"If you were able to beat her in the past, you can do it again. That's my mentality and that's how I always play," said the Serb, currently eighth in the world.

Comments
Topics mentioned in this article
Victoria Azarenka Agnieszka Radwanska Maria Sharapova Australian Open 2014 Tennis
Get the latest Cricket news, check out the India cricket schedule, Cricket live score . Like us on Facebook or follow us on Twitter for more sports updates. You can also download the NDTV Cricket app for Android or iOS.