Wu, 21, the world number 186, is acutely aware millions of his compatriots will be following his every move against Croatia's Ivan Dodig, when he will become the first Chinese man to play a Grand Slam tournament. 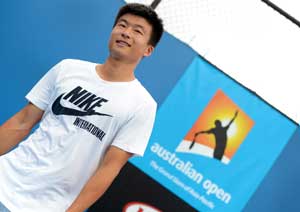 When Wu Di walks nervously on court at the Australian Open on Tuesday, he'll be making history for Chinese tennis -- and especially their much-maligned men.

Wu, 21, the world number 186, is acutely aware millions of his compatriots will be following his every move against Croatia's Ivan Dodig, when he will become the first Chinese man to play a Grand Slam tournament.

The significance of the moment is not lost on Wu, who feels he is taking another step on the journey by China's men into the heights of competitive tennis.

"We're (Chinese men) improving the whole time so now we're very close to the top 100, which is the goal we're trying to achieve. We need time," Wu told AFP at Melbourne Park.

"I was in Korea playing a tournament there. I watched it on the Internet. I watched every point, I couldn't sleep. It was very late in Korean time. I was very nervous," he recalled.

"When she won, it was like a dream. My God, she's won a Grand Slam. I was very happy for her. I would like to do the same, but it's very tough."

While Wu is happy to celebrate the achievements of Li, who comes from his home city, Wuhan, he is also keen to lead China's men out of the shadows of their more successful women's counterparts.

Li has already reached two Grand Slam finals and is ranked sixth in the world, while Zheng Jie has two Grand Slam doubles titles and made the Wimbledon semi-finals in 2008.

Meanwhile Wu and Zhang Ze, ranked 158, are the only Chinese players in the men's top 350. Wu reached the Australian Open by winning an Asia-Pacific wildcard tournament in Nanjing. Zhang did not qualify.

"Li Na is one motivation for me but we're doing completely different things. She plays women's tennis, I'm playing men's tennis but the goal she achieved is what I want to achieve in the future," Wu said.

"Everyone expects to win matches and for me, winning a Grand Slam motivates a lot of players including us male players. We can do well on the world stage."

China is increasingly in focus on the tennis circuit with the Women's Tennis Association replacing Japan's premier tournament with a new event in Wuhan next year -- one of five on Chinese territory.

Tennis Australia is microblogging updates from the Australian Open on Chinese social media sites, and for the first time, a group of Chinese children are performing as ballboys and girls.

Li, who duly won her first-round match on Monday, sent best wishes to Wu and said she hoped to have time to watch him play.

"It's the first Grand Slam for him. Of course, he will get a little bit nervous probably. But I would like to say is good experience for him," she said.

Wu said he hoped to turn his nerves into positive energy against Dodig, when he will attempt to pull off one of the most eye-catching wins of the first round.

"I'm a little bit nervous because it's my first time playing a Grand Slam," he said. "Everybody is coming, my boss, my coach and everything. It's a little bit more pressure for me but I try to turn my pressure into motivation."

He added: "This is the first time I've played a Grand Slam, so it's very different for me but everybody says come here and fight every point. I will focus on every point and enjoy everything, it will be fine."

Comments
Topics mentioned in this article
Australian Open 2013 Tennis Ivan Dodig
Get the latest updates on India vs South Africa and check out  Schedule, Results and Live Score. Like us on Facebook or follow us on Twitter for more sports updates. You can also download the NDTV Cricket app for Android or iOS.