Victoria Azarenka says she is 'in the zone' after another win

Azarenka lost just one game in a 6-1, 6-0 thrashing of Greek Eleni Daniilidou and will next play American Jamie Hampton, who sent Thai qualifier Luksika Kumkhum packing. 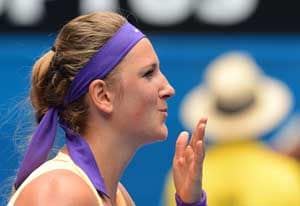 Pumped up defending champion Victoria Azarenka said she was "in the zone" on Thursday with her game exactly where she wants it as she cruised into the Australian Open third round.

The world number one Belarusian lost just one game in a 6-1, 6-0 thrashing of Greek Eleni Daniilidou and will next play American Jamie Hampton, who sent Thai qualifier Luksika Kumkhum packing.

Azarenka's victory keeps the top seed on course to meet former world number one Caroline Wozniacki in the quarter-finals as she defends her first Grand Slam title, and she said she was in good touch.

"I felt really good, I enjoyed a lot the way I was focused," she said.

"I definitely stepped it up from my first match, and I was in the zone trying to execute all of my shots. I was trying to make everything happen, and that's what I'm happy about."

Azarenka had only played the Greek once before, five years ago, and lost, but on a hot day on Rod Laver Arena she opened her account by breaking to love and then comfortably held, with the signs ominous for Daniilidou.

The Belarusian easily broke again and held for 4-0, with the Greek till then having won just three points in the entire match.

Azarenka's key rivals, Maria Sharapova and Serena Williams, both scored double bagel whitewashes here and Azarenka looked intent on producing her own until Daniilidou finally won a game for 5-1, to big cheers.

But it was only a hiccup for Azarenka, and with her renowned grunting growing in volume and shouts of "C'mon" becoming more regular, she raced through the second set in 31 minutes.

"I was just trying to focus on one point at a time and not looking too much at the scoreboard or anything. Just really executing myself and staying in the moment," she said, adding that the heat was motivation to get off court quickly.

"It was pretty hot. That's why I was trying to play fast. The first match I got a little bit sunburned and you don't want to make that mistake again."

While Azarenka is the world's top-ranked player, Sharapova and Williams are breathing down her neck and she needs to reach the final to have any chance of remaining number one.

Both of her top rivals have also been in ominous form in Melbourne, but Azarenka said too much shouldn't be read into the scorelines.

"Well, I think it's really competitive. The score sometimes doesn't tell the whole story about the match, and to win matches like 6-0, 6-0, it requires a lot of discipline, a lot of focus," she said.

"Sometimes it's harder than winning, you know, 6-2, 6-2 or something like that. So I honestly can only speak for myself, but it seems like everybody is in great form, and it's going to be very interesting."

Comments
Topics mentioned in this article
Australian Open 2013 Tennis Samantha Stosur Svetlana Kuznetsova Eleni Daniilidou Jelena Jankovic Sania Mirza Victoria Azarenka Elena Vesnina
Get the latest updates on ICC T20 Worldcup 2022 and CWG 2022 check out the Schedule, Live Score and Medals Tally. Like us on Facebook or follow us on Twitter for more sports updates. You can also download the NDTV Cricket app for Android or iOS.