Victoria Azarenka needs to improve 'everything'

Hampton left the court for treatment on her back, but despite being in obvious pain she held serve for the set, with Azarenka slamming her racquet in frustration. 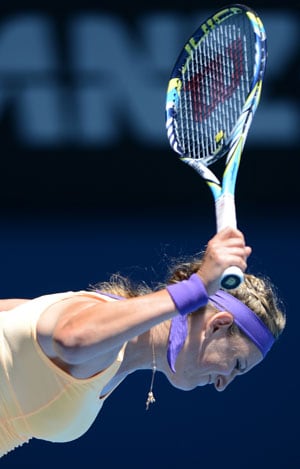 Victoria Azarenka admitted on Saturday she needs to improve "everything" to successfully defend her Australian Open title after surviving a scare against injured American Jamie Hampton.

The top-seeded Belarusian came through the match on Rod Laver Arena 6-4, 4-6, 6-2 but it was much tougher than the scoreline suggested against a player who was wincing in pain from a back problem.

The world number one knows she was lucky to get through, and asked what parts of her game she needs to improve, she replied: "Simple: everything.

"It was definitely tough," she added. "It's always good to know you can battle through not playing well, not feeling great.

"It's important to be alive in the tournament. Towards the end things were going better for me. I'm glad about that, but definitely she played an outstanding match."

The plucky Hampton had never contested a Grand Slam third round before, and gave it her all in a match packed with quality rallies and tight games.

She later revealed she had two herniated disks in her lower back.

"I had back problems. Hurt my back last year at the French Open pretty badly," she said.

"It's something I deal with day-to-day, and, yeah, it was hurting. Normally when my back starts hurting I start cramping."

Asked in a post-match interview what the level of pain was on a scale of one to 10, she said: "Right now it's kind of gone down to a three or four. On the court serving it's pretty good, seven."

On a cool Melbourne day, Azarenka held her opening game with pinpoint serves and got a break in the fourth when Hampton hit a backhand into the net.

She turned the pressure up with some powerful groundstrokes from the baseline but Hampton refused to give up and had a break point in the fifth that she failed to convert.

Azarenka was being tested and was soon pumping her fist and shouting "C'mon" as her emotions showed, and her persistence paid off when a delicate lob handed her another break to be 5-1 in front.

But the 23-year-old Hampton bounced back to 5-4 before the Belarusian stepped up a gear and took the set on a double fault.

Neither player was serving well and Azarenka got broken early in the second, with her frustrations evident as she was pushed around the court.

Hampton left the court for treatment on her back, but despite being in obvious pain she held serve for the set, with Azarenka slamming her racquet in frustration.

The brave American, who appeared close to tears at times from the discomfort, had the crowd onside and got a crucial break in the third for a 2-1 lead before Azarenka fought back to win the next five games.

Asked what her coach said to her after the match, Azarenka replied: "You can do better, but still, you cannot be negative, because I won the match."

The victory keeps her on course to meet former world number one Caroline Wozniacki in the quarter-finals, but she must first get past unseeded Russian Elena Vesnina.

Comments
Topics mentioned in this article
Tennis Australian Open 2013 Victoria Azarenka Jamie Hampton
Get the latest updates on IPL 2021, IPL Points Table , IPL Schedule 2021 , live score . Like us on Facebook or follow us on Twitter for more sports updates. You can also download the NDTV Cricket app for Android or iOS.