Azarenka drew criticism after her semi-final against Sloane Stephens, when she blew five match points and immediately called a medical timeout. When she returned, she broke the teenager's serve and won the match. 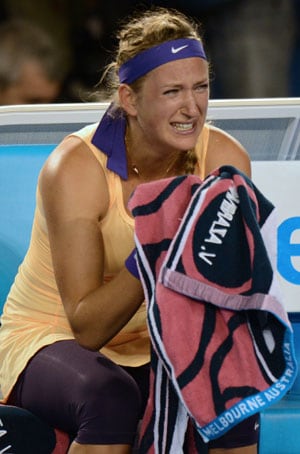 Victoria Azarenka said she was delighted with her response Saturday after shrugging off a gamesmanship controversy and a hostile crowd to retain her Australian Open title.

The world number one suffered a stormy build-up over a controversial medical timeout she took in the semi-finals, and was castigated by Australian media and the Rod Laver Arena crowd.

But Azarenka, who also maintained focus despite two injuries to her Chinese opponent, Li Na, and a nine-minute break for fireworks during the match, said she was pleased with her reaction.

"It isn't easy, that's for sure," the Belarusian said. "But I knew what I had to do. I had to stay calm. I had to stay positive. I just had to deal with the things that came to me.

"I was actually really happy that I went through so many things, to know I can still produce the tennis."

Azarenka drew criticism after her semi-final against Sloane Stephens, when she blew five match points and immediately called a medical timeout. When she returned, she broke the teenager's serve and won the match.

She seemed shell-shocked by the outcry when she faced journalists afterwards, and organised a special briefing for Australian media on Friday to further explain herself.

With fans siding with Li during the final, and jeering Azarenka and her distinctive shrieking, the Belarusian was up against it. But she toughed it out 4-6, 6-4, 6-3 for her second Grand Slam victory.

"I was expecting way worse, to be honest," Azarenka said of the crowd.

"What can you do? You just have to go out there and try to play tennis. It's a tennis match, tennis battle, the final of the Australian Open."

She added: "The pressure was there, but I like the pressure. It's a very interesting thing. It pushes you to be better. You can take it as a negative, but I take it as a positive."

The victory in 2hr 40min ensured Azarenka stayed as world number one. Her second Australian Open was secured in vastly different circumstances to her uncomplicated 6-3, 6-0 thumping of Maria Sharapova a year ago.

"It's a completely different mix of feelings," she said. "This one is way more emotional. It's going to be extra-special.

"It's just a feeling you get, the things you've been through, because you're the only one who knows. What happened with Sloane, it was a big deal. I take it as a great learning experience."

Azarenka, 23, hoped she won back some supporters with her gallant victory. She claimed her off-court persona was far removed from the stern on-court version.

"On the court I'm really focused, really determined. But off the court, I'm a different person," she said.

Comments
Topics mentioned in this article
Tennis Australian Open 2013 Victoria Azarenka Na Li Sloane Stephens
Get the latest updates on India vs England Series, India vs England , live score and IPL 2021 Auction . Like us on Facebook or follow us on Twitter for more sports updates. You can also download the NDTV Cricket app for Android or iOS.