Venus Williams returns to court and to winning ways

"She's back and fiery!" the announcer told the crowd, as Williams warmed up for the first-round match, which marked her 58th trip to a Grand Slam tournament. 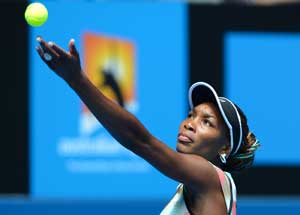 Venus Williams used her powerful serve to full effect to start her Australian Open campaign with a 6-1, 6-0 win over Galina Voskoboeva of Kazakhstan on Monday.

The seven-time Grand Slam winner was forced to miss last year's Australian Open due to illness, and the crowd welcomed her back to Melbourne Park with extended applause.

"She's back and fiery!" the announcer told the crowd, as Williams warmed up for the first-round match, which marked her 58th trip to a Grand Slam tournament.

The 32-year old American played with power and determination, taking an early command of the match. She whacked winners and a steady stream of powerful serves with a first-serve percentage of 70 percent. She also took advantage of six of 11 break-point opportunities.

"Obviously it's nice to spend less time on the court, and not be in long sets," Williams said. "Obviously a win is a win no matter what it is, but it's nice when it's more routine."

The next set went faster. Williams didn't drop a game, wrapping up the match in an hour flat with a beautiful backhand passing shot.

After dropping outside the top 100 following a seven-month layoff due to Sjogren's syndrome, an auto-immune disease that can cause fatigue, Williams finished in the quarterfinals or better at five of the 10 events she played in 2012 and improved her ranking to No. 24 by year's end.

It's been a decade since Williams' best showing at the Australian Open, which came in 2003 when she lost the final to her younger sister, Serena, who is a favorite to win this year in Melbourne.

Now that she's back on tour and feeling fit, she's thinking about extending her career into a 20th season.

"Now I have done a lot of things and I don't really have anything to prove except for I have my desire to play and to play well," she said. "That really is what it's about at this point, is getting the best out of me."

No. 3-ranked Serena cheered on her sister from the stands. The younger Williams won Wimbledon, the U.S. Open and an Olympic gold in 2012.

Venus could meet Maria Sharapova in the third round at Melbourne Park.

Comments
Topics mentioned in this article
Australian Open 2013 Tennis Galina Voskoboeva Venus Williams
Get the latest updates on ICC T20 Worldcup 2022 and CWG 2022 check out the Schedule, Live Score and Medals Tally. Like us on Facebook or follow us on Twitter for more sports updates. You can also download the NDTV Cricket app for Android or iOS.