The rise and rise of Andy Murray

Murray, with career prize money of $25 million, is now into his third straight Grand Slam final and his sixth overall, a rematch of last year's US Open decider and the 2011 Australian Open title match against Djokovic. 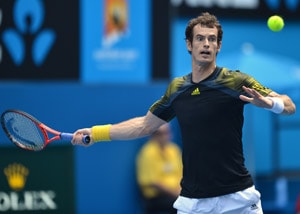 After early heartbreak it all appears to be falling into place for Andy Murray on his inexorable journey to the top in what's been described as a golden age for men's tennis.

The taciturn Scot, 25, the number three ranked player in the world, is finally realising his rich potential after the misery and tears of bombing out in his first four Grand Slam finals.

Murray sobbed after pushing Roger Federer to three hard-fought sets in the 2010 Australian final, and at Wimbledon last year he wept during his on-court interview after again losing to Federer, blubbering the words "getting closer".

It all changed for Murray with his breakthrough triumph over Novak Djokovic in last September's US Open title match, when he became the first British man since Fred Perry in 1936 to win a Grand Slam.

He admits winning at Flushing Meadows had lifted a massive weight off his back and allowed him to play with greater freedom and self-belief.

Murray, with career prize money of $25 million, is now into his third straight Grand Slam final and his sixth overall, a rematch of last year's US Open decider and the 2011 Australian Open title match against Djokovic.

Into his ninth year on the men's tour, Murray can look back on 2012 as his watershed season when he also got the better of Federer for the London Olympics gold medal.

"Not just Grand Slams. I always felt like I was having to prove something every time I went on the court because I hadn't won a Slam," he said.

Murray has slayed another of his demons with victory over his Grand Slam nemesis Federer, who is six years his senior, in a five-set thriller over four hours to reach the Australian Open final.

Although he is only one of two players along with Rafael Nadal to own a winning record over Federer, the Swiss great had claimed all three of their previous Grand Slam exchanges, all in finals.

"It's satisfying. I've lost some tough matches against him in the Slams. So to win one, especially the way that it went, yeah, it was obviously nice," he said.

Murray does not suffer fools gladly and is a straight-shooter, his often unsmiling demeanour presented to the media at odds with a man known as a joker amongst his close friends.

In his schooldays in the Scottish town of Dunblane, he was a pupil when deranged gunman Thomas Hamilton burst in and murdered 16 children and one teacher in 1996.

He recalls surviving by hiding under a desk in the headmaster's office.

Under the coaching of no-nonsense Ivan Lendl, Murray has changed to a more offensive style and is finally making his mark against Djokovic, Federer and Nadal in what Andre Agassi has called the golden age of tennis.

Murray even went to the extraordinary length of inviting British journalists, who questioned his fitness before his breakthrough triumphs last year, to train with him in Miami to see how hard he works out.

"I think those years of having all of those questions and then finally to be able to answer them, I think it was all part of the process," he said. "So having won against Novak before in a Slam final will help mentally."

Comments
Topics mentioned in this article
Tennis Australian Open 2013 David Ferrer Rafael Nadal Stanislas Wawrinka Roger Federer Andy Murray Novak Djokovic Bernard Tomic
Get the latest updates on India vs England Series, India vs England , live score and IPL 2021 Auction . Like us on Facebook or follow us on Twitter for more sports updates. You can also download the NDTV Cricket app for Android or iOS.