A pumped-up Serena Williams is gunning for a sixth Australian Open crown as she kicks off her bid for the first calendar year Grand Slam since the 1980s. 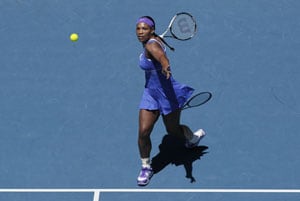 A pumped-up Serena Williams is gunning for a sixth Australian Open crown as she kicks off her bid for the first calendar year Grand Slam since the 1980s.

Few will be betting against the formidable and newly focused American, 31, in Melbourne after she claimed her 47th career title in Brisbane this month and admitted she was "absolutely" targeting all four majors this year.

No woman has won the Australian Open, Roland Garros, Wimbledon and the US Open in the same year since Steffi Graf in 1988, and Rod Laver is the only man to achieve tennis's holy grail in the professional era.

Williams, who won Wimbledon, the US Open and Olympic gold last year, is also halfway to holding all the major titles at once for the second time, after first completing the non-calendar year "Serena Slam" in 2002-2003.

The 15-time Grand Slam winner sits behind defending champion Victoria Azarenka and Maria Sharapova in the current world rankings, but when it comes to the opening major of the season, she is peerless in the modern game.

"Brisbane made my preparation for Melbourne that much better," she tweeted this week, as she looks to atone for her disappointing and uncharacteristic fourth round loss to Ekaterina Makarova at last year's event.

"I'm so pumped for winning the Brisbane international," she added.

Williams goes into the tournament as firm favourite after her blistering performances in the second half of 2012, when she picked up her titles at Wimbledon, the Olympics and the US Open, as well as the WTA Championships.

And in a blunt warning to her opponents, she said she was probably in the form of her career.

"I was looking at a lot of old matches on YouTube and I feel like right now I'm playing some of my best tennis," she said.

"I feel like I want to do better and play better still, and I've always felt like I could play better."

Another Australian tournament win would return Williams to world number one, and put her just two major titles short of the great Chris Evert and Martina Navratilova, who both own 18 Grand Slam singles crowns.

Reigning French Open champion Sharapova also has significant experience in Melbourne and will be playing her 10th Australian campaign, keen to add to her only title in 2008.

But injury worries could derail her plans after being forced to withdraw from the season-opening Brisbane International with a right collarbone injury.

The setback mirrors what happened in 2012, when Sharapova skipped Brisbane because of an ankle niggle. But she then finished runner-up to Azarenka at Melbourne Park.

Sharapova has been pounding the plexicushion courts in the Melbourne heat this week to get herself fit for a serious tilt at the Aus$2.43 million (US$2.54 million) winner's cheque.

"I have my own fair share of experience and know that it's much more important to be healthy going into a big tournament like the Australian Open than go into something big with a lot of matches and feel like you're not prepared health-wise," said the 25-year-old.

World number one Azarenka is also battling injury concerns, withdrawing from her Brisbane semi-final against Williams after failing to recover from a big toe infection that she picked up during a pedicure.

But she said the problem was improving and that she would be ready for the Australian Open.

"Had a workout and tried a little bit of running today. Toe is feeling much better. Really happy," she tweeted on Sunday.

Former world number one Caroline Wozniacki could also be in contention, along with China's Li Na, ranked six in the world and a Melbourne runner-up in 2011.

Australian hopes rest with Samantha Stosur but the 28-year-old, recovering from foot surgery, has never performed well at home and she was bundled out of Brisbane and the Sydney International this week in the first round.

Comments
Topics mentioned in this article
Australian Open 2013 Tennis Maria Sharapova
Get the latest updates on ICC T20 Worldcup 2022 and CWG 2022 check out the Schedule, Live Score and Medals Tally. Like us on Facebook or follow us on Twitter for more sports updates. You can also download the NDTV Cricket app for Android or iOS.