Listen to the latest songs, only on JioSaavn.com
Aus Open, 2013
Sports Home
Story ProgressBack to home

At 19, Sloane Stephens is the only teen still standing after coming out on top of her third round clash with 18-year-old Briton Laura Robson, who is also rapidly improving and shocked eighth seed Petra Kvitova in the previous round. 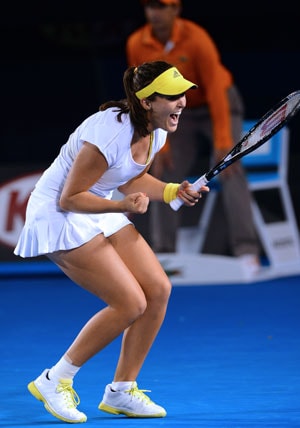 A raft of teenage women have made their mark at the Australian Open, unlike the men, and senior players are sitting up and taking notice of the emerging talent.

Eleven teenagers made the women's draw's second round and while only one -- American Sloane Stephens -- progressed to the fourth round, the potential was plain to see.

Fifteen-time Grand Slam champion Serena Williams, who was 17 when she won the US Open and French Opens in 1999, believes it is only a matter of time before one of the new crop starts challenging the top names.

"I think it will happen again, probably soon," she said about the chances of a teenager winning a major tournament, after overcoming impressive 19-year-old Spaniard Garbine Muguruza in the second round.

"I think if the person is strong enough, tall enough, or short, but if they're strong enough physically and mentally, I think it's completely possible."

Williams said the game was now more demanding than when she was young.

But she highlighted fellow American Madison Keys, who is just 17 but made the third round at Melbourne Park before losing to fifth seed Angelique Kerber in a close-fought match.

"I think the game has changed, but when I was 17 I think I was playing pretty good tennis, as well as (Martina) Hingis and the other teenagers that won," she said.

"So I think the game is definitely physical.

"But I also think that there are some players, like Madison Keys is like 6'2", and she's very strong and she's only 17. She has several years while she's still a teenager to win a Grand Slam."

Chinese number one and world number six Li Na was another to praise the athletic Keys after they met in Sydney this month.

"If she plays like this every match she will soon be in the top 20, top 15 and then top 10," said Li after being tested by the teenager.

Another promising talent is Stephens, whose poise and power has seen her compared to a young Williams, who praised her fellow American as "a great player" with massive potential.

At 19, she is the only teen still standing after coming out on top of her third round clash with 18-year-old Briton Laura Robson, who is also rapidly improving and shocked eighth seed Petra Kvitova in the previous round.

It was an intense and entertaining contest showcasing two of the sport's brightest young talents, which drew big crowds to watch.

The two players are good friends and Stephens hopes their rivalry -- they also played in Hobart this month -- can develop into something special.

"We're turning into the Fed/Nadal rivalry," she joked, but then added: "Whenever we play, we have good matches.

"I mean, it could be (a special rivalry). It's obviously going to take a while. The matches are good. We have good matches when we play. So we'll see."

Stephens faces another young player in Serb Bojana Jovanovski, 21, for a place in the quarter-finals on Monday, for the prize of a potential last-eight showdown with Williams.

Other teenagers who did their reputations no harm at Melbourne Park included Croation Donna Vekic, 16, German Annika Beck, 18, and Russian Daria Gavrilova, also 18.

Comments
Topics mentioned in this article
Australian Open 2013 Tennis Na Li Madison Keys Bojana Jovanovski Sloane Stephens Garbine Muguruza
Get the latest Cricket news, check out the India cricket schedule, Cricket live score . Like us on Facebook or follow us on Twitter for more sports updates. You can also download the NDTV Cricket app for Android or iOS.