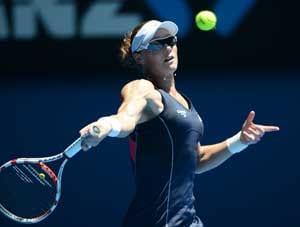 Samantha Stosur overcame first-round jitters in front of the vocal local crowd to beat Chang Kai-chen of Taiwan 7-6 (3), 6-3 at the Australian Open on Monday.

No. 9-seeded Stosur, the 2011 U.S. Open champion, had a shock first-round loss at Melbourne Park last year. The pressure on Stosur has been building this month after she lost her first matches in lead up tournaments at Brisbane and Sydney.

She showed little evidence of the burden of expectations in a routine win Monday at a packed Rod Laver Arena. She has never gone past the fourth round at the Australian Open in 10 previous appearances at her home major.

Comments
Topics mentioned in this article
Australian Open 2013 Tennis Samantha Stosur Kai-Chen Chang
Get the latest updates on ICC T20 Worldcup 2022 and CWG 2022 check out the Schedule, Live Score and Medals Tally. Like us on Facebook or follow us on Twitter for more sports updates. You can also download the NDTV Cricket app for Android or iOS.