The Polish world number four crushed hapless Dominika Cibulkova 6-0, 6-0 in just over an hour in Friday's final of the Sydney International to take her unbeaten streak this year to nine. 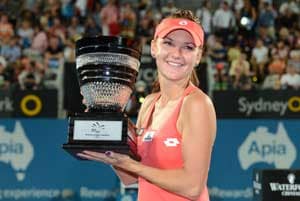 Agnieszka Radwanska goes into next week's Australian Open the hottest women's player on form and says she believes she can win a Grand Slam.

The Polish world number four crushed hapless Dominika Cibulkova 6-0, 6-0 in just over an hour in Friday's final of the Sydney International to take her unbeaten streak this year to nine.

It was Radwanska's 12th career singles title and she has yet to drop a set this year.

Now she steps up to take on the women's top three -- Victoria Azarenka, Serena Williams and Maria Sharapova -- in the year-opening slam, but her confidence is high.

"Well, I think if I'm going to play like I did today, in Melbourne, I will be very happy. So we'll see," she said.

The 23-year-old faces Australian qualifier Bojana Bobusic in her first match at the Open and is seeded to face China's Li Na in the quarters and Sharapova in the semis.

"Wherever I go now I just always think I can win it. I think Melbourne is also that kind of tournament," she said.

"Being in the top 10, top five already for a couple years, I think it means that I can also win the Grand Slam."

Radwanska reached her first major final at Wimbledon last year only to be beaten by Serena Williams in three sets, 6-1, 5-7, 6-2 and has yet to go beyond the quarter-final stage at the Australian Open.

"I'm extremely happy I've won two titles in a row and have not even lost a set. Really it's been an amazing two weeks," she said.

"The Australian Open is a different tournament, a different story, and I just have to start from the beginning.

"I just hope I can play at the same level there as well."

Radwanska said she will not have time to lavishly celebrate her Sydney win with her next match scheduled at the Australian Open on Monday.

"My coach and I said if we won (Sydney) we would not to go drinking and have a party, just to have a huge piece of cheesecake," she said smiling.

Comments
Topics mentioned in this article
Australian Open 2013 Tennis Agnieszka Radwanska Dominika Cibulkova
Get the latest updates on ICC T20 Worldcup 2022 and CWG 2022 check out the Schedule, Live Score and Medals Tally. Like us on Facebook or follow us on Twitter for more sports updates. You can also download the NDTV Cricket app for Android or iOS.