Speaking after bouncing back to his very best by thrashing German veteran Tommy Haas at the mixed teams Hopman Cup on Friday, Djokovic said he was on track for his Australian Open title defence. 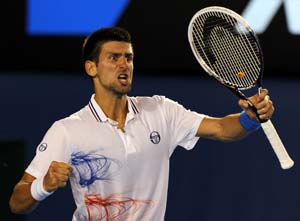 World number one Novak Djokovic is under no illusion as to the enormity of the task he faces in winning a third successive Australian Open.

Speaking after bouncing back to his very best by thrashing German veteran Tommy Haas at the mixed teams Hopman Cup on Friday, Djokovic said he was on track for his Australian Open title defence.

The 6-2, 6-0 win over the 21st-ranked Haas followed a disappointing straight sets loss to 20-year-old Australian Bernard Tomic on Wednesday, the Serbian's first defeat on Australian soil since 2010.

Djokovic, who opened the year by winning in Abu Dhabi before a late arrival at the Hopman Cup, said he was feeling much fresher after a few more days in Australia and where he wanted to be heading into the year's first Grand Slam.

While his great rival Rafael Nadal, who he beat in an epic five-set final that lasted nearly six hours in Melbourne last year, won't be there due to illness, Djokovic said that didn't make his task any easier.

He pointed to Andy Murray's breakthrough victory at the US Open as evidence of the mounting depth in men's tennis.

"It is a huge challenge," he said of his quest for three successive Australian Opens.

"I like the hard court, I like the conditions and I am going to go for the trophy.

"I have high ambitions for myself, but I am absolutely aware it is going to be very difficult, because today's men's tennis is very competitive and Andy Murray winning his first Grand Slam title last year also got him to this group of players that are serious candidates to win the Australian Open."

He lamented the absence of Nadal, describing it as sad, and dismissed any concerns over his shock loss to Tomic.

"I felt drastically better than in the first few days here, I've had a few more hours of practice, rest and sleep and got used to the conditions here," he said.

"Right now, I believe I am where I need to be (for the Australian Open).

"Not 100 percent physically, but I am getting there and we are still working on some things in particular that will make me feel 100 percent for Melbourne in 10 days."

Comments
Topics mentioned in this article
Tennis Australian Open 2013 Tommy Haas Novak Djokovic
Get the latest updates on ICC T20 Worldcup 2022 and CWG 2022 check out the Schedule, Live Score and Medals Tally. Like us on Facebook or follow us on Twitter for more sports updates. You can also download the NDTV Cricket app for Android or iOS.