Novak Djokovic will grapple with his growing rivalry with Andy Murray and the enduring powers of Roger Federer as he bids for the first Australian Open hat-trick of the professional era. 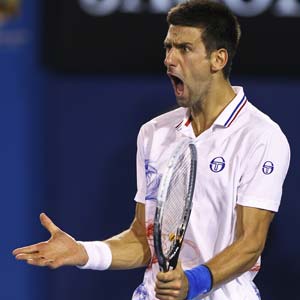 Novak Djokovic will grapple with his growing rivalry with Andy Murray and the enduring powers of Roger Federer as he bids for the first Australian Open hat-trick of the professional era.

Rafael Nadal's withdrawal through illness has robbed Melbourne Park of a repeat of last year's epic final, when Djokovic finally tamed the Spaniard at 1:40 am after a record, 5hr 53min final which left him with bleeding toes.

But the Serbian world number one will face a stiff challenge from the newly assertive Andy Murray, fresh from his first Grand Slam win and keen to avenge his final and semi-final defeats to Djokovic in Melbourne in 2011 and 2012.

Also pressing hard will be Federer, holder of an unmatched 17 Grand Slams and still hungry for more even though, at the age of 31, he is conceding six years to his younger rivals.

Murray, the world number three, was thrashed by Djokovic in the 2011 Australian Open decider, and narrowly lost out in their thrilling five-set semi-final last year.

But the Scot then beat Djokovic on his way to London Olympics gold, and again in the US Open final as he became Britain's first male Grand Slam singles winner since Fred Perry in 1936.

Despite Nadal's absence because of a stomach virus, after a knee injury ruled him out for much of last year, the competing claims of the top three men leave the year's opening Grand Slam unpredictable.

"I have high ambitions for myself, but I am absolutely aware it is going to be very difficult, because today's men's tennis is very competitive," Djokovic said.

"Andy Murray winning his first Grand Slam title last year has also got him to this group of players that are serious candidates to win the Australian Open."

Djokovic tuned up for the Open playing for Serbia in the mixed teams Hopman Cup in Perth, and he said he relished the battles to come at Melbourne Park, where he has won three of his five Grand Slam titles.

No one has won more than two consecutive Australian Open titles since Roy Emerson completed his run of five in a row in 1967, two years before the advent of professional tennis.

"It is a huge challenge. I love the Australian Open, that court brings out the best memories of my career, the great support I always get there, the night sessions, the day sessions, it is always interesting to play," Djokovic said.

"Every Grand Slam brings something special to it. The Australian Open is by far my most successful one so I am really looking forward to it.

"I like the hard court, I like the conditions and I am going to go for the trophy."

Murray, coached by Ivan Lendl and relaxed and confident after breaking his Grand Slam jinx, comes into the Open on the back of his 25th career singles title at the Brisbane International.

"I hope that the Australian Open goes a bit better for me than it did last year," said the two-time finalist.

"I played some very good tennis there. I lost a set in the first round, and then won the next four matches in straight sets, until the (semi-final) match with Novak which I played very well."

Murray, who survived some uncomfortable moments to beat Grigor Dimitrov in the Brisbane final, acknowledged he has developed a greater mental edge following his successes in the last half of 2012.

"It's a change of mentality really, and that doesn't happen in a few weeks. It's taken time to believe that that's the right thing to do, to be aggressive," he said.

Meanwhile four-time winner Federer, keen to extend his long stay at the top of men's tennis, has unusually opted out of playing a warm-up tournament. The Swiss has not reached the Melbourne final since his last win in 2010.

"I want to try and make this last as long as I can... I don't want to fizzle out," the world number two said.

"I hope to keep on playing for many years, because I love it. I love the pressure of playing with a new generation coming up, who are improving quickly.

"It's part of the puzzle that makes me motivated, trying to play against the likes of Novak, Andy and Rafa."

David Ferrer, who won the most matches (76) and titles (seven) last year, is the fourth seed in Nadal's absence and has a chance to climb above the fourth-ranked fellow Spaniard for the first time in his career.

Comments
Topics mentioned in this article
Australian Open 2013 Tennis Roger Federer Stanislas Wawrinka Rafael Nadal David Ferrer Andy Murray Novak Djokovic Bernard Tomic
Get the latest updates on ICC T20 Worldcup 2022 and CWG 2022 check out the Schedule, Live Score and Medals Tally. Like us on Facebook or follow us on Twitter for more sports updates. You can also download the NDTV Cricket app for Android or iOS.