He stunned former French Open winner Gaston Gaudio in the first round of the 2005 US Open but has needed five operations in all for hip, elbow and hernia problems. 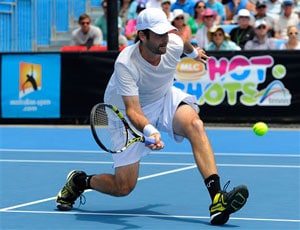 Luckless American Brian Baker was struck down by a fresh injury nightmare at the Australian Open on Wednesday, after battling back from six years on the sidelines.

The world number 57, who bravely returned to tennis in 2011 following a series of operations, was a set up after winning the first 7-6 and 1-1 in the second against compatriot Sam Querrey when he collapsed clutching his knee.

"It didn't look very good," said Querrey. "He said he kind of just felt his knee almost buckle and kind of heard like a pop or a snap.

"He didn't know if it was bones or a tear, but he couldn't straighten it, couldn't walk. I feel awful for him."

Baker, 27, was whisked away for treatment and was not immediately available for interview.

He stunned former French Open winner Gaston Gaudio in the first round of the 2005 US Open but has needed five operations in all for hip, elbow and hernia problems.

"He's the last person that deserves anything like that," Querrey said. "He does everything right, treats his body great, just trying to come back, and then something like that happens, it's just so unlucky.

"He was just going, 'I just can't believe it'. He just had his head down, just like, 'Why is this happening to me?'"

Baker, who reached his first career final in Nice last year, and also played the French Open and Wimbledon, earlier explained to the ATP website why he decided to return to the tour after so long away.

"I felt like I had some unfinished business. My body was the main factor why I took off. I always wanted to come back but my body wouldn't allow me to," he said last year.

"I started to feel a little bit better last summer, so I told myself to give it a go and see how far I can take it."

Comments
Topics mentioned in this article
Tennis Australian Open 2013 Brian Baker Sam Querrey
Get the latest Cricket news, check out the India cricket schedule, Cricket live score . Like us on Facebook or follow us on Twitter for more sports updates. You can also download the NDTV Cricket app for Android or iOS.