Murray's bulked-up physique has attracted comments at the Australian Open, but he insisted it's the new fitted shirt which is making his upper body look bigger. 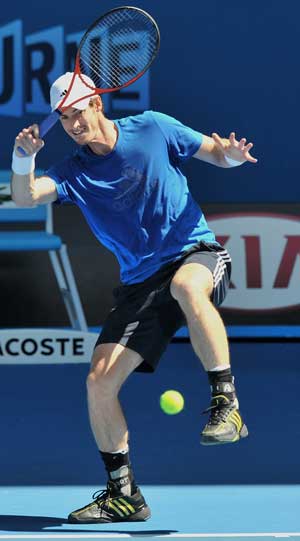 Murray's bulked-up physique has attracted comments at the Australian Open, but he insisted it's the new fitted shirt which is making his upper body look bigger.

However, the US Open champion, patiently answering questions about his sartorial choices, said a tight shirt was better than baggy, especially in hot temperatures of Melbourne.

"The only thing I don't like on shirts is if they come down too low and sometimes your elbows can get caught in the shirt," he said.

"The less material there is on the shirt I think probably the better. There's less to get in the way. But so long as they're tailored somewhat, I think there's no real problem."

Murray also said he could not see himself wearing the type of shorter shorts worn by his coach Ivan Lendl in his playing days in the 1980s.

"I actually wore a pair at Wimbledon when I was with Fred Perry that were short," he said.

"Not quite like what Ivan and those guys used to wear on the court. I can't see a return to them, to be honest.

"Yeah, they were a bit too short. Didn't leave too much to the imagination."

Murray is not the only player sporting a new look at the Australian Open, with Roger Federer wearing bright pink laces for his second-round match against Nikolay Davydenko.

Comments
Topics mentioned in this article
Australian Open 2013 Tennis Andy Murray
Get the latest updates on ICC T20 Worldcup 2022 and CWG 2022 check out the Schedule, Live Score and Medals Tally. Like us on Facebook or follow us on Twitter for more sports updates. You can also download the NDTV Cricket app for Android or iOS.