Australia in the past few weeks has sweltered in record-breaking temperatures which in parts of the country have topped 45 degrees Celsius (113 Fahrenheit), sparking scores of wildfires. 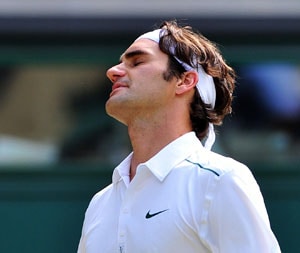 US legend John McEnroe on Monday, warned Roger Federer could struggle in the Melbourne heat as he bids for a fifth Australian Open crown, tipping younger rivals Novak Djokovic and Andy Murray.

The Swiss great, 31, is currently number two in the world, sandwiched in the rankings between top-ranked Djokovic of Serbia and Britain's Murray, and hungry to add to his 17 Grand Slam crowns.

Australia in the past few weeks has sweltered in record-breaking temperatures which in parts of the country have topped 45 degrees Celsius (113 Fahrenheit), sparking scores of wildfires.

And McEnroe said if the mercury rises again, Federer, whose Wimbledon win last year ended a Grand Slam drought of more than two years, could struggle to live with his younger rivals, who are both 25.

"Djokovic and Murray to me are the two biggest favourites and Roger is going to have a tougher time winning majors, particularly if the heat becomes a factor," said McEnroe, 53, speaking by telephone from New York.

"And at his age it's not easy to bounce back as quickly and play best-of-five sets. But it's also very difficult for anyone besides those guys to be able to beat at least two if not three of them, so that would be very unlikely."

But he said it was too early to herald a new era in the men's game in which Djokovic and Murray would be dominant, with uncertainty over Rafael Nadal, who has had an extended injury absence, and Federer still a factor.

On the women's side, McEnroe, who won seven Grand Slam singles titles, backed Serena Williams, 31, to shine after her stellar year in 2012, when she won Wimbledon, the US Open, the Olympic title and the WTA Championships.

"Serena, to me when she's playing her best is the best female player I've ever seen. I think she seems to be very motivated and I think it's good for women's tennis if she's out there for a couple more years," he said.

McEnroe is gearing up to renew his rivalry with Murray's coach, Ivan Lendl, in an exhibition match in Hong Kong in March.

"I think that's what's turned out, him getting back into tennis, coaching Murray and also getting back and getting his feet wet playing some of the events," he said.

"Us getting to play has been good for both of us and exciting that we have this chance again. It was a heated rivalry. I think both of us are very much looking forward to this."

Comments
Topics mentioned in this article
Australian Open 2013 Tennis Roger Federer Rafael Nadal David Ferrer Stanislas Wawrinka Bernard Tomic Andy Murray Novak Djokovic
Get the latest updates on ICC T20 Worldcup 2022 and CWG 2022 check out the Schedule, Live Score and Medals Tally. Like us on Facebook or follow us on Twitter for more sports updates. You can also download the NDTV Cricket app for Android or iOS.