Dimitrov has bristled at questions about Sharapova, calling it a "privacy invasion". 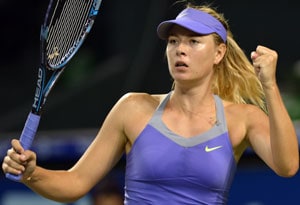 Maria Sharapova has insisted it's "manageable" to date a fellow top athlete after her relationship with Bulgarian player Grigor Dimitrov set tongues wagging.

"I think it's very manageable. We have a very hectic lifestyle and travelling schedule, but in a way, this is what we do and we have to accept it," she said, according to Melbourne's Herald Sun.

Sharapova broke up last year with Slovenian basketball player Sasha Vujacic, but her relationship with Dimitrov, nicknamed "Baby Federer" for his playing style, has been the talk of the tennis circuit in recent weeks.

"Relationships are important in life," she was quoted as saying. "Tennis only lasts as long as your body allows, and there is another step in life -- relationships.

"It's a matter of how you think and manage it."

Dimitrov has bristled at questions about Sharapova, calling it a "privacy invasion".

Comments
Topics mentioned in this article
Tennis Australian Open 2013 Maria Sharapova
Get the latest updates on ICC T20 Worldcup 2022 and CWG 2022 check out the Schedule, Live Score and Medals Tally. Like us on Facebook or follow us on Twitter for more sports updates. You can also download the NDTV Cricket app for Android or iOS.