Maria Sharapova on Wednesday admitted she was flattered after attracting tens of thousands of Twitter followers in just two days, but warned she would keep her tweets to a minimum. 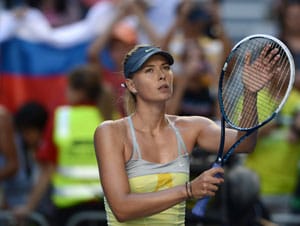 Maria Sharapova on Wednesday admitted she was flattered after attracting tens of thousands of Twitter followers in just two days, but warned she would keep her tweets to a minimum.

The photogenic world number two, who is also promoting a new range of sweets, already has 61,000 followers since sending her first tweet on Monday: "Your ultimate sugarmama has arrived." She has only sent one since.

"It's flattering," Sharapova said at the Australian Open, after reaching the third round. "It just shows you the power of social media, how everyone is just online these days with devices.

"I mean, sometimes you see me and I have my notebook here and my phone here. It's like I'm looking back and forth. Sometimes my mum speaks to me and she says, I think I need to send you a text message to get your attention.

"It's pretty crazy, but it shows you how powerful these things are. I'm happy that I'm able to share some things with my fans they don't get to see, or hear me say. It's just a fun way to communicate with them."

However, Sharapova has a long way to go to match Serena Williams, who has nearly 3.4 million followers -- perhaps due to her colossal number of almost 11,000 tweets.

"I won't be doing it every single minute," she said. "I won't be telling people what I'm eating. I think that's very non-interesting.

"But when I do have things to say, I'm sure I will. Last night I was watching this match and I really wanted to say something about the commentary going on, but I really bit my tongue on that one.

She added: "I'm a rookie. There are a lot of things I'm still learning about. I'm just starting to follow things and people. Now I'm learning to, is it hash tag things, right? That was a new one for me."

Comments
Topics mentioned in this article
Australian Open 2013 Tennis Eoin Morgan Carlton Cole Danny Gabbidon Maria Sharapova
Get the latest updates on ICC T20 Worldcup 2022 and CWG 2022 check out the Schedule, Live Score and Medals Tally. Like us on Facebook or follow us on Twitter for more sports updates. You can also download the NDTV Cricket app for Android or iOS.