Luckless Li Na says she blacked out during final

However, she said she was feeling positive about her tennis after reaching her first Grand Slam final since winning the 2011 French Open, in a return to form under new coach Carlos Rodriguez. 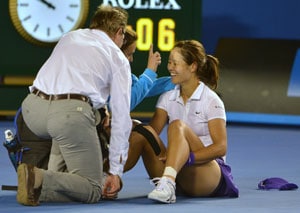 China's Li Na was left cursing her luck after she twice took a tumble and briefly knocked herself unconscious in a disastrous Australian Open final on Saturday.

Li was a set up against Victoria Azarenka when she first went over on her left ankle, and she fell again in the third set, immediately after a break for Australia Day fireworks, smashing the back of her head on the court.

The world number six did not blame her misfortune for the 4-6, 6-4, 6-3 defeat, but she admitted she was a "little bit worried" when she blacked out after banging her head.

"I think I was a little bit worried when I fell down and my head hit the floor, because for two seconds I couldn't really see anything. It was totally black," she said.

"So when the physio come, she was like, 'Focus on my finger'. I started laughing. I was thinking, 'This is a tennis court, not a hospital'."

Li, 30, was seeking her second Grand Slam title and was in the Australian final for the second time, after her 2011 loss to Kim Clijsters.

Although she teared up immediately after the defeat, Li put on a brave face and joked when she met reporters later.

"After the match, I was feeling like, 'How many years since I fell down on the court?' I mean, it was amazing today. It was twice on the court," she said, calling herself "stupid" for the accidents.

"Maybe if I didn't fall down, it's another story. You never know," she added. "But the truth is, I did fall down, so nothing can change."

However, she said she was feeling positive about her tennis after reaching her first Grand Slam final since winning the 2011 French Open, in a return to form under new coach Carlos Rodriguez.

Li also enjoyed support from both Chinese fans and neutrals at Rod Laver Arena, after Azarenka caused controversy in the semi-finals by taking a medical timeout after blowing five match reports.

"I could hear a lot of Chinese fans, yeah. Also I could see them with the China national flag everywhere. It looked like the China Open," she said.

Comments
Topics mentioned in this article
Australian Open 2013 Tennis Na Li
Get the latest updates on India vs England Series, India vs England , live score and IPL 2021 Auction . Like us on Facebook or follow us on Twitter for more sports updates. You can also download the NDTV Cricket app for Android or iOS.