Hard-hitting Serena Williams fires a warning at the Australian Open

There was no stopping the American, with Williams firing down her equal fastest serve of 207 kilometres per hour (128 mph) -- also clocked in round two against Garbine Muguruza -- on her way to taking the set in 31 minutes. 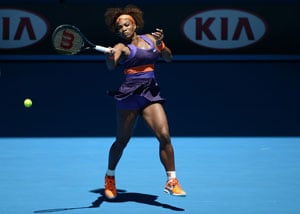 Five-time Australian Open champion Serena Williams blasted the fastest serve of her career against Japan's Ayumi Morita Saturday as she gained valuable court time in her bid for a sixth title.

The American third seed had raced through her opening two matches at Melbourne Park for the loss of just two games but was made to work harder by Morita -- and she said the longer rallies were just what she needed.

"I feel today was actually a really good match for me," said Williams, after beating the Japanese number one 6-1, 6-3.

"I was involved in a lot of longer points, something I definitely wanted. I feel good. I hope I can keep this level up and go higher."

Williams followed defending champion Victoria Azarenka onto Rod Laver Arena and could meet her in the semi-finals if the draw pans out as scheduled, with a potential final against Maria Sharapova.

"She's playing great. I think she's doing everything well," she said of Sharapova, who thumped Serena's sister Venus in the third round on Friday.

"I have to get there. I have three more matches to win. I can't worry about that right now. I just have to take everything a step at a time."

Of more immediate concern to Williams is her fourth round opponent on Monday, 14th-seeded Russian Maria Kirilenko, a player she has beaten five time out of five.

"Maria (Kirilenko) is playing consistent tennis, especially the past 16, 18 months, she's been so consistent," said Williams.

"So my goal is just to be really focused against such a player that's doing so well."

Against Morita, Williams easily won the first game but was then pushed on her serve, before stepping it up with a blistering backhand down the line, giving her a break for 3-1.

There was no stopping the American, with Williams firing down her equal fastest serve of 207 kilometres per hour (128 mph) -- also clocked in round two against Garbine Muguruza -- on her way to taking the set in 31 minutes.

But the 15-time major-winner, who has an eye on the first calendar-year Grand Slam since 1988, wavered in the second set and Morita raced to a 3-0 lead.

It was a short-lived advantage with Morita imploding and Williams reeling off six games in a row to easily clinch the match.

"I went for it, but I wasn't going for it that hard," she said of her super-quick serve, which achieved a speed rarely seen in the women's game.

Legendary American tennis coach Nick Bollettieri was watching the game and was impressed by Williams.

"Serena serve motion smooth as silk," he tweeted. "Motion is perfect, full extension of arm and racket, lift and power from legs."

Comments
Topics mentioned in this article
Australian Open 2013 Tennis Maria Kirilenko Maria Sharapova Serena Williams Victoria Azarenka
Get the latest Cricket news, check out the India cricket schedule, Cricket live score . Like us on Facebook or follow us on Twitter for more sports updates. You can also download the NDTV Cricket app for Android or iOS.