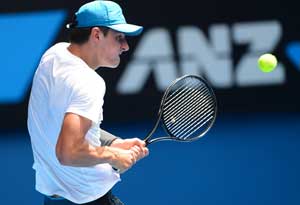 Tomic has won 10 straight matches this year, including the non-sanctioned Hopman Cup in Perth, and will meet Federer in round three on Saturday after the 17-time Grand Slam champion beat Russia's Nikolay Davydenko.

"What a match it is," Tomic said. "Ten out of 10 now with matches. I feel so confident. This is the perfect time to play him.

"I think I've got a good attitude to win. I've beaten a lot of good players over the past two weeks, especially Novak (Djokovic). I think I can do it if he wins his match.

"I'm ready. I'm not going to say I don't have the belief. I do have the belief now. It's possible. I showed that in Perth, that you can beat these players. Now I'm going to try to beat him."

Federer, 31, beat Tomic in straight sets in the fourth round at Melbourne Park last year but the Australian, who upset world number one Djokovic at the Hopman Cup in Perth, claimed he was a different player now.

"I don't want to speak too soon, but I have my tactics on what I have to do," he said.

"I want to win Grand Slams."

Comments
Topics mentioned in this article
Australian Open 2013 Tennis Roger Federer Stanislas Wawrinka Rafael Nadal David Ferrer Andy Murray Novak Djokovic Bernard Tomic
Get the latest updates on ICC T20 Worldcup 2022 and CWG 2022 check out the Schedule, Live Score and Medals Tally. Like us on Facebook or follow us on Twitter for more sports updates. You can also download the NDTV Cricket app for Android or iOS.