Li has a reputation for fragility but the world number six said her psychology had improved since teaming up with Justine Henin's ex-coach Carlos Rodriguez last year. 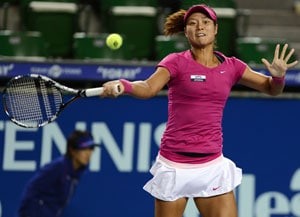 China's Li Na said her new coach had helped give her a stronger mentality after she won her Australian Open first-round match with ease on Monday.

Li has a reputation for fragility but the world number six said her psychology had improved since teaming up with Justine Henin's ex-coach Carlos Rodriguez last year.

Li lost to Kim Clijsters in the 2011 Melbourne final and last year she let slip four match points against the Belgium before crashing out in the fourth round, a defeat which left her in tears.

After overpowering Sesil Karatantcheva of Kazakhstan 6-1, 6-3, she said Rodriguez had improved her mind as well as her technique.

"I've been working with him since last August, and I'm feeling pretty good. I don't know how is he feeling, but he seems OK," she said.

"He's not only a teacher about tennis. It's not only about technique. He's also about making my mind more stronger on the court."

Li established herself early in each set as she went through in 1hr 18min to set up a second-round match with Olga Govorstova of Belarus.

The 2011 French Open winner belted a deep forehand winner to claim the first game and she seized control by breaking for 3-1 and then 5-1, taking the set with ease.

Karatantcheva made her work harder for the second set but her resistance ultimately proved futile as Li sealed her progression with a forehand winner.

Li has gone through a succession of coaches, including her husband Jiang Shan and Denmark's Michael Mortensen, who steered her to the historic French Open win.

"It's always tough in first round. You just come to the court 50-50. You never know, you can beat her or you can lose her," said Li.

"Everyone is the same against each other. So before the match he (Rodriguez) told me, I hope you can pass the first round. I said, OK, I'll try to win."

Comments
Topics mentioned in this article
Australian Open 2013 Tennis Na Li
Get the latest updates on ICC T20 Worldcup 2022 and CWG 2022 check out the Schedule, Live Score and Medals Tally. Like us on Facebook or follow us on Twitter for more sports updates. You can also download the NDTV Cricket app for Android or iOS.