The 30-year-old Li has been in impressive form this year as she searches for her second Grand Slam title, winning the inaugural Shenzhen Open and reaching the semi-finals of the Sydney International. 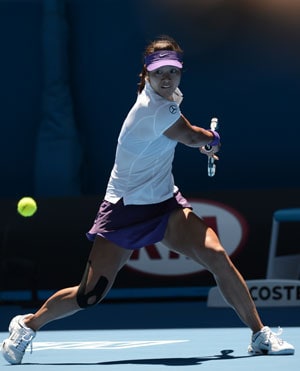 China's top player Li Na battled into the third round of the Australian Open on Wednesday but she was put through her paces by Olga Govortsova before clinching a straight-sets victory.

The former French Open winner, among the leading contenders at Melbourne Park, rallied past the Belarusian 6-2, 7-5 in 82 minutes and next plays either Czech Kristyna Pliskova or Romania's Sorana Cirstea.

If Li gets through that encounter she faces a potential fourth round clash with local hope and ninth seed Samantha Stosur.

Li came out of the blocks with gritty determination, smashing through her opening service game then breaking her 58th-ranked opponent to seize control and establish a 3-0 lead.

It went with serve before Li broke again to take the set.

But a wild Li forehand smash on game point handed the Czech an early break in an erratic second set.

The Chinese star immediately bounced back to level, but again threw it away with a sloppy next game to be 2-1 behind.

Govortsova, who has failed to go beyond the second round at Melbourne in six attempts, pulled into a 5-3 lead and the tie looked to be going into three sets before Li knuckled down to claw back four games in a row for victory.

The 30-year-old Li has been in impressive form this year as she searches for her second Grand Slam title, winning the inaugural Shenzhen Open and reaching the semi-finals of the Sydney International.

The plexicushion courts seem to suit her style of play and she made the final at Melbourne Park in 2011, losing to Kim Clijsters, and was a semi-finalist in 2010.

Li was knocked out in the fourth round last year, failing to go beyond that point in any of the Grand Slams, but she has shown progress under Carlos Rodriguez, the former coach of Justine Henin.

Comments
Topics mentioned in this article
Australian Open 2013 Tennis Na Li
Get the latest updates on India vs South Africa and check out  Schedule, Results and Live Score. Like us on Facebook or follow us on Twitter for more sports updates. You can also download the NDTV Cricket app for Android or iOS.