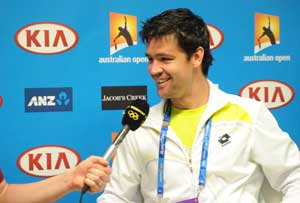 Scot Jamie Baker took another step on a remarkable comeback from a life-threatening blood disease Saturday by qualifying for the Australian Open.

The rare blood condition affects the immune system and there were fears he would not play again, but the 26-year-old has fought back and also overcome depression to keep his career moving in the right direction.

"It's huge," he said of making the tournament proper.

"It is a really, really good platform to work from."

Baker, who often trains alongside fellow Scot and world number three Murray, contracted the illness a training camp in the United States and spent three days in intensive care.

He got through the crisis but his ranking plummeted and he revealed that he battled depression for a long time after.

"I suffered quite bad depression afterwards," said Baker, who is now ranked at 246.

"But there was a distinct moment two years ago when I moved on. It was at a tournament in Thailand when it happened.

"I came off court and felt normal again. It felt like someone had lifted a concrete building off me."

Baker's comeback follows the diagnosis of fellow British player Ross Hutchins with Hodgkins Lymphoma, a type of cancer, which prompted a tearful dedication from Murray after winning this month's Brisbane International.

Comments
Topics mentioned in this article
Australian Open 2013 Tennis Andy Murray Jamie Baker
Get the latest updates on ICC T20 Worldcup 2022 and CWG 2022 check out the Schedule, Live Score and Medals Tally. Like us on Facebook or follow us on Twitter for more sports updates. You can also download the NDTV Cricket app for Android or iOS.