Azarenka powered to a 4-0 lead in the opening set over Niculescu, who is winless in singles tournaments on the WTA Tour. 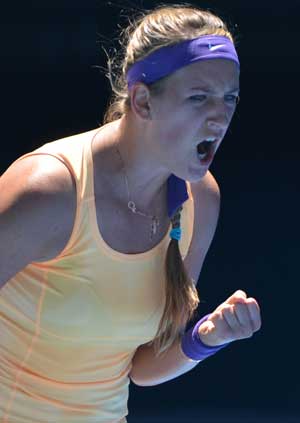 The Belarusian top seed, who beat Maria Sharapova in the final last year, is defending a Grand Slam title for the first time and overcame some second set defiance from Niculescu to ease through 6-1, 6-4 minutes.

The 23-year-old won six WTA titles in 2012 but she was forced to withdrew from this month's Brisbane International with an infected big toe, hampering her Grand Slam build-up, but she showed little effect on Rod Laver Arena.

She quickly raced to a 3-0 first set lead, showcasing a sparkling array of shots, closing it out in just 31 minutes.

But the 49th ranked Romanian found her feet in the second set and pulled into a 3-0 lead before Azarenka battled back, drawing level at 4-4 then wrapping up the match when Niculescu sent a forehand long.

Standing in her way of back-to-back Australian titles is 15-time Grand Slam champion Serena Williams, with the pair pitted in the same half of the draw.

That sets up a potential blockbuster semi-final between the two, but first Azarenka must get past her second round opponent, either Eleni Daniilidou of Greece or Czech Karolina Pliskova.

Comments
Topics mentioned in this article
Australian Open 2013 Tennis Monica Niculescu Victoria Azarenka
Get the latest updates on ICC T20 Worldcup 2022 and CWG 2022 check out the Schedule, Live Score and Medals Tally. Like us on Facebook or follow us on Twitter for more sports updates. You can also download the NDTV Cricket app for Android or iOS.