Known for his never-say-die spirit, Somdev battled for four hours at court number eight but ended up on the wrong side of the result. 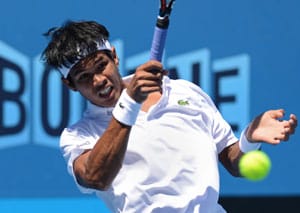 Indian tennis player Somdev Devvarman conceded a two set lead to go down against Poland's Jerzy Janowicz in a marathon second round match at the Australian Open here on Wednesday.

The lone Indian in the men's singles draw squandered a brilliant opportunity to lose 7-6, 6-3, 1-6, 0-6, 5-7 against the 26th ranked Pole on court number eight at Melbourne Park.

Devvarman, who has slipped to 551 in the ranking after missing most of last year owing to a shoulder injury, got the better of world no. 78 Bjorn Phau in the opening round.

The long hard fought battle saw the opening set lasting 79 minutes with Devvarman clinching it 12-10 in the tie-break. It took a toll on Janowicz, who in frustration over a line call, hit the umpire's chair with his racket and threw his water bottle on the other side of the court.

Devvarman won the second set without much difficulty and looked set for another big win. But Janowicz bounced back in the contest, hitting 15 winners to take the set comfortably.

The 24th seed was unstoppable in the fourth set and struck 23 winners to level the match.

It was a battle of nerves in the decider with very little separating the two players. In the end, Janowicz's aggression paid off as he made up for 15 unforced errors by finding three more winners. The Indian only hit five winners.

Comments
Topics mentioned in this article
Tennis Australian Open 2013 Somdev Devvarman Jerzy Janowicz Mischa Zverev
Get the latest updates on ICC T20 Worldcup 2022 and CWG 2022 check out the Schedule, Live Score and Medals Tally. Like us on Facebook or follow us on Twitter for more sports updates. You can also download the NDTV Cricket app for Android or iOS.