The second-seeded Indo-Czech pair was beaten 3-6, 5-7 by the Israeli-South African combination in a shade less than an hour and half. 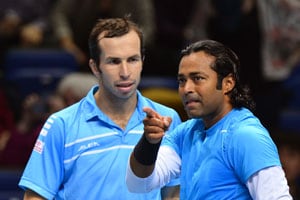 Reigning champions Leander Paes and his Czech partner Radek Stepanek were knocked out in the first round of the men's doubles at the Australian Open here on Thursday. They lost 3-6, 5-7 to South African Kevin Anderson and Israeli Jonathan Erlich.

The second-seeded Indo-Czech pair was beaten 3-6, 5-7 by the Israeli-South African combination in a shade less than an hour and half.

Paes, who completed a career Grand Slam of winning all four majors here last year, and Stepanek were listless in the first set.

But in the second they rallied well only to fall just when they looked good to take the match into a third set.

The key to the success of Anderson and Erlich was their serve on which they scored well. They also used the break points to good purpose.

Paes and Stepanek, on the other hand, were found wanting both in the return of serve and converting the break points.

Paes has thus joined India's top women's doubles player Sania Mirza in bowing out of the paired event in the first round.

Paes will be playing the mixed doubles with Russian Elena Vesnina. They are seeded second. They play Pakistan's Aisam-Ul-Haq Qureshi and Sofia Avidsson in the first round.

India's other doubles exponent Mahesh Bhupathi is playing with Russian Nadia Petrova. The fifth seeds meet Anastasia Rodionova of Australia and Jean-Julien Rojer of the Netherlands.

Comments
Topics mentioned in this article
Australian Open 2013 Tennis Leander Paes Radek Stepanek Kevin Anderson
Get the latest updates on ICC T20 Worldcup 2022 and CWG 2022 check out the Schedule, Live Score and Medals Tally. Like us on Facebook or follow us on Twitter for more sports updates. You can also download the NDTV Cricket app for Android or iOS.