Australian Open: Agnieszka Radwanska makes it ten in a row

The No. 4 -seeded Radwanska captured the Sydney International title beating Dominika Cibulkova of Slovakia 6-0, 6-0 a week after winning a WTA tournament in Auckland, New Zealand. 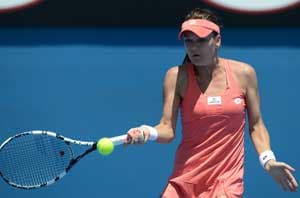 Agnieszka Radwanska has won her 10th consecutive match of 2013, defeating Australian wildcard entry Bojana Bobusic of 7-5, 6-0 in the first round at the Australian Open on Monday.

The No. 4 -seeded Radwanska captured the Sydney International title on Saturday, beating Dominika Cibulkova of Slovakia 6-0, 6-0 a week after winning a WTA tournament in Auckland, New Zealand. The 23-year-old Radswanska has 12 career singles titles.

Bobusic was serving for the first set at 5-4, but Radwanska break in that game and again in the 12th to take the first set and start a dominating roll in the second.

Comments
Topics mentioned in this article
Australian Open 2013 Tennis Bojana Bobusic Agnieszka Radwanska
Get the latest updates on India vs South Africa and check out  Schedule, Results and Live Score. Like us on Facebook or follow us on Twitter for more sports updates. You can also download the NDTV Cricket app for Android or iOS.