Samantha Stosur threw away a winning position in the final set against Zheng, who reeled off five games in a row to reach the next round. 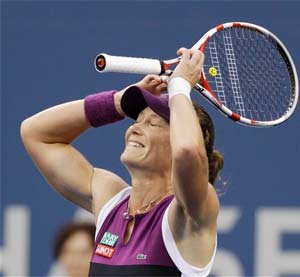 Australia's media didn't pull their punches on Thursday with howling coverage of Samantha Stosur's self-confessed "choke" at the Australian Open.

"It's beyond a choke for nervous Sam," headlined The Australian, after the ninth seed and former US Open champion surrendered meekly to China's Zheng Jie in round two.

"Abject Stosur sinks to new depths," said The Age, while the Herald-Sun went with "Home-groan talent," adding that the "Yips are getting bigger" for Stosur after a string of failures on Australian soil.

Stosur threw away a winning position in the final set against Zheng, who reeled off five games in a row to reach the next round.

For the Australian, it was her sixth loss in seven matches on home soil, including last year's first-round exit at Melbourne -- which came just months after she won the US Open in New York.

The latest defeat left just two Australians, Bernard Tomic and wildcard James Duckworth, in the second round. The host country has never failed to get at least one player into the third round.

"Whatever word you want to put on it, at 5-2 up in the third, double break probably is a bit of a choke, yeah," Stosur admitted on Wednesday, adding that the loss was "100 percent" down to mental fragility.

Comments
Topics mentioned in this article
Australian Open 2013 Tennis Samantha Stosur
Get the latest updates on ICC T20 Worldcup 2022 and CWG 2022 check out the Schedule, Live Score and Medals Tally. Like us on Facebook or follow us on Twitter for more sports updates. You can also download the NDTV Cricket app for Android or iOS.