Andy Murray through to Open third round in straight sets 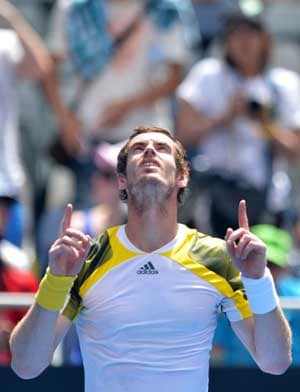 U.S. Open champion Andy Murray had another easy win at the Australian Open on Thursday, a 6-2, 6-2, 6-4 victory over Joao Sousa of Portugal.

Murray, who ended a 76-year drought by British men in Grand Slam tournaments with his win at Flushing Meadows last year, dropped only seven games in his opening match against Robin Haase of the Netherlands.

Standing in the way of a potential second Grand Slam title for Murray is a likely semifinal against No. 2 Roger Federer, who will play his second-round match later Thursday at Rod Laver Arena when the hot daytime temperatures were expected to subside.

Comments
Topics mentioned in this article
Australian Open 2013 Tennis Joao Sousa Andy Murray
Get the latest Cricket news, check out the India cricket schedule, Cricket live score . Like us on Facebook or follow us on Twitter for more sports updates. You can also download the NDTV Cricket app for Android or iOS.