Andy Murray thriving with monkey off back

Murray says the breakthrough at Flushing Meadows in 2012 eased the pressure and set him up perfectly to build on the best year of his career. 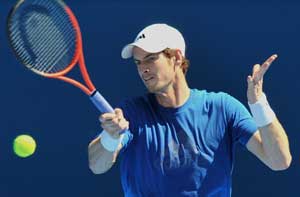 Andy Murray said Saturday winning the US Open has taken a massive Grand Slam monkey off his back and allowed him to relax more than ever coming into the opening major of the year in Melbourne.

The Scot, 25, said the breakthrough at Flushing Meadows in 2012 eased the pressure and set him up perfectly to build on the best year of his career.

"Not just Grand Slams. You know, I kind of maybe always felt like I was having to prove something every time I went on the court because I hadn't won a Slam," he said ahead of next week's Australian Open.

"You know, even when you win a Masters Series, people still asked me always about the Slams. So it's nice just to kind of not have to worry about that anymore.

Murray started his season in perfect style by winning the Brisbane International against Grigor Dimitrov and enters the Australian Open determined to better the two runner-up spots he earned in 2010 and 2011.

The Olympic champion starts the tournament as one of the favourites, alongside holder Novak Djokovic, with their task made easier by Rafael Nadal's withdrawal through illness.

"I'm very revved up," Murray said ahead if his opening-round clash with Dutchman Robin Haase. "I feel more relaxed than I have done the week before a Slam.

"Obviously last year was by far my best year on the court. I had my first Wimbledon final, the Olympics was obviously a great experience, then my first Grand Slam after that.

"I finished with my highest ranking that I ever finished before, so there were a lot of firsts for me last year, and that's pretty important."

Working against him in Melbourne is that no first time Grand Slam winner, in the open era, has gone on to win their next major tournament, but Murray said he won't let that stand in his way.

"I said I feel more relaxed, but I don't know, the day when I play my first match, I could be unbelievably nervous. I don't know what effect it will have on me until I'm put in that situation.

"But I also know how hard these events are to win. If I don't win the Australian Open, I don't think it will be down to having won the US Open.

"It's down to the level of competition and how tough it is to win these events rather than what happened, you know, four or five months ago."

Comments
Topics mentioned in this article
Australian Open 2013 Tennis Andy Murray
Get the latest updates on ICC T20 Worldcup 2022 and CWG 2022 check out the Schedule, Live Score and Medals Tally. Like us on Facebook or follow us on Twitter for more sports updates. You can also download the NDTV Cricket app for Android or iOS.