IND vs AUS: After India's capitulation in Adelaide, former England captain Michael Vaughan had tweeted that "India are going to get hammered in the Test Series" and predicted a 4-0 whitewash. 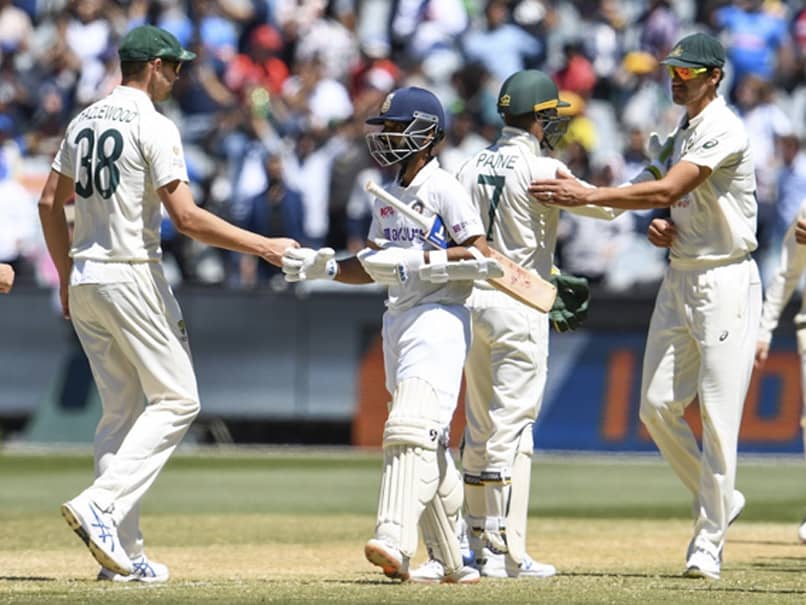 AUS vs IND: India beat Australia by 8 wickets at the MCG to level the four-match series at 1-1.© AFP

India looked down and out after the humiliating loss in the opening Test in Adelaide. With talismanic captain and batting star Virat Kohli also returning home on paternity leave, few gave India a hope of making an impression in the remainder of the three Tests. After India's capitulation in Adelaide, former England captain Michael Vaughan had tweeted that "India are going to get hammered in the Test Series" and predicted a 4-0 whitewash. Attaching that tweet, former India cricketer Wasim Jaffer took to Twitter to troll the Englishman by posting a hilarious meme following the visitors' memorable win at the Melbourne Cricket Ground on Tuesday.

India bounced back from the Adelaide debacle in style by outplaying the hosts on all four days of the second Test to level the four-match series at 1-1.

Not only was Rahane astute in his captaincy but was also the star with the bat in hand. He scored a magnificent century in the first innings to give India a crucial 131-run lead.

Australia were just as poor in the second innings as they were in the first, with star batsman Steve Smith having a torrid time. The hosts could only manage 200 with debutant Mohammed Siraj taking three wickets, to add to his 2 dismissals in the first.

Jasprit Bumrah, Ravichandran Ashwin and Ravindra Jadeja too bowled beautifully. India's bowling performance was the all the more impressive with fast bowler Umesh Yadav sidelined due to an injury after bowling just 3.3 overs in the second innings.

The third Test is scheduled to be played at the Sydney Cricket Ground (SCG) starting on January 7, however, with coronavirus cases rising in Sydney, MCG could host the next match as well.

Ajinkya Rahane Michael Vaughan Wasim Jaffer Australia vs India 2020-21 Australia vs India, 2nd Test Cricket
Get the latest updates on IPL 2021, IPL Points Table , IPL Schedule 2021 , live score . Like us on Facebook or follow us on Twitter for more sports updates. You can also download the NDTV Cricket app for Android or iOS.