Australia vs India: Tim Paine Pulls Off A "Screamer" To Dismiss Cheteshwar Pujara On Day 2. Watch

India vs Australia: Tim Paine pulled off an excellent catch behind the stumps, despite being wrong footed, to dismiss Cheteshwar Pujara. 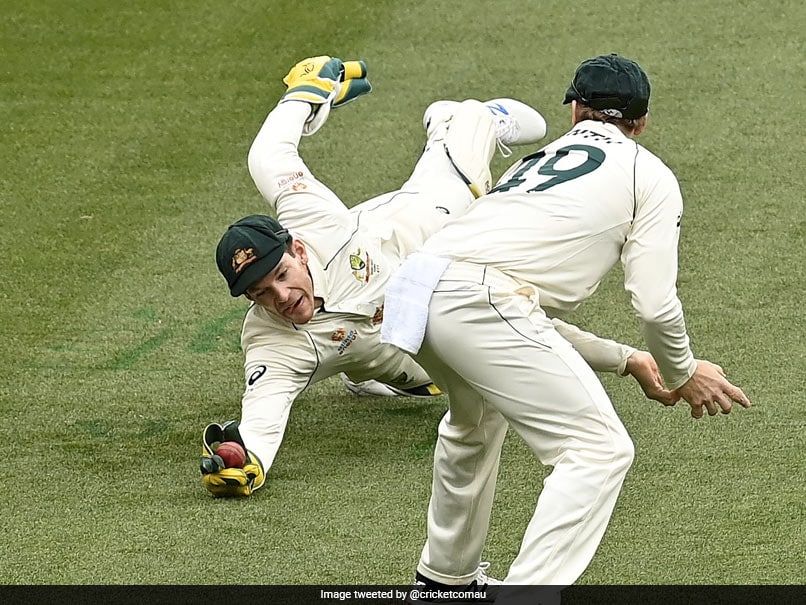 Australia captain Tim Paine pulled off a "screamer" despite being wrong footed to send back India's batting mainstay Cheteshwar Pujara on Day 2 of the ongoing second Test at the MCG. India's number three was looking good, negotiating whatever the Australian bowlers were throwing at him. However, Pat Cummins, who bowled a marathon spell of nine overs on the trot, managed to found the outside edge of Pujara's bat and Paine dived to his right, managing to hold onto the ball. Shane Warne, who was commentating live on the match, termed the catch a screamer. "Screamer, it wouldn't have carried to the slips. Excellent catch from the wicketkeeper," Warne said.

A pearler of a pluck from Paine! And it's the big wicket of Pujara too!@hcltech | #AUSvIND pic.twitter.com/q4rFhCb7Yj

Cummins also got the first wicket to fall in the first session on Day 2 of the Boxing Day Test at the Melbourne Cricket Ground.

The Australian pacer bowled a full delivery outside off stump, drawing Shubman Gill to play an expansive drive. The Indian opener got a faint edge and Paine completed a simple catch behind the stumps.

Gill, who was dropped twice, scored 45 runs in his debut Test for India. He hit eight boundaries during his stay in the middle.

The visitors managed to add 54 runs in the first session on Day 2 to their overnight score of 36 for one.

At the lunch break, India were 105 runs behind Australia's first innings total of 195 with seven wickets in hand.

On Saturday, Jasprit Bumrah and Ravichandran Ashwin helped India bowl out the hostson the opening day of the second Test.

Cheteshwar Pujara Tim Paine Australia vs India 2020-21 Australia vs India, 2nd Test Cricket
Get the latest updates on IPL Auction 2023 and check out  IPL 2023 and Live Cricket Score. Like us on Facebook or follow us on Twitter for more sports updates. You can also download the NDTV Cricket app for Android or iOS.