India vs Australia: Navdeep Saini walked off the field on the opening day of the Gabba Test due to an injury with Rohit Sharma completing his over. 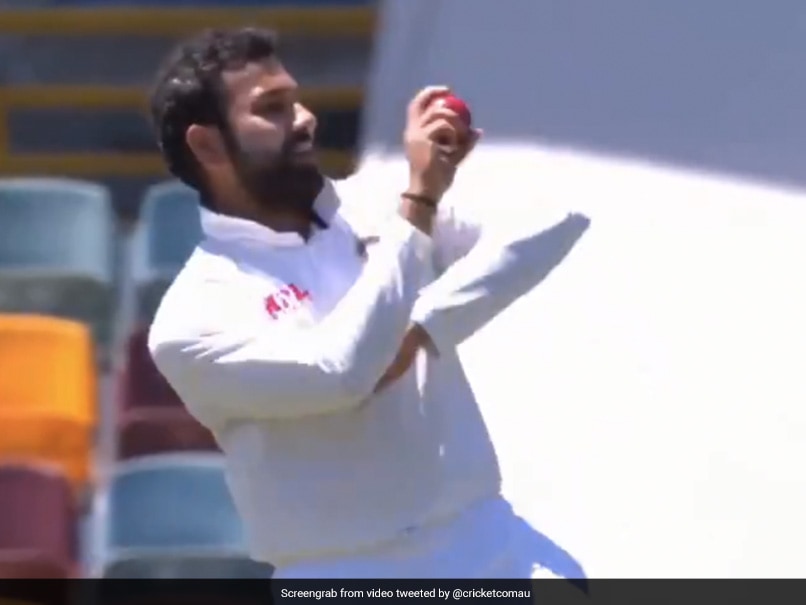 Rohit Sharma rolled his arm over to complete Navdeep Saini's over.© Twitter

Rohit Sharma, who has bowled off-spin whenever called upon, stunned everyone as he bowled a medium pace delivery to complete Navdeep Saini's over on the opening day of the fourth Test. The pacer walked off the field, having gone down holding his groin. Rohit bowled a half-tracker which was pushed onto the off side for a single by Marnus Labuschagne. Cricket Australia took to Twitter to share the video of Rohit bowling a gentle medium pace ball to finish the 36th over of the innings. "Into the attack: Rohit Sharma from the Vulture St End," the video was captioned.

Into the attack: Rohit Sharma from the Vulture St End!

Before walking off the field, Saini managed to square up Labuschagne but unfortunately for him, Ajinkya Rahane dropped a sitter at gully.

After the dropped chance, Saini was seen on the ground in some discomfort as Team India's physio Nitin Patel came out to check on the fast-bowler before accompanying him to the pavilion.

Saini did come back after a drinks break but left the field soon after as injury concerns grew for India.

India, marred with a number of injuries, were forced to field a fairly inexperienced bowling attack.

T Natarajan and Washington Sundarwere handed debuts while Shardul Thakur, who had played just one Test, was also included in the XI as India made four changes for the final match of the four-game series.

Earlier in the day, Australia, after winning the toss and opting to bat, scored 65 runs at the loss of two wicket at the Lunch break on Day 1 of the Gabba Test.

Ajinkya Rahane Australia vs India 2020-21 Australia vs India, 4th Test Cricket
Get the latest updates on Fifa Worldcup 2022 and check out  Fifa World Cup Schedule, Stats and Live Cricket Score. Like us on Facebook or follow us on Twitter for more sports updates. You can also download the NDTV Cricket app for Android or iOS.