Australia vs India: "Ajinkya Bhaiya Asked Me If I Could Bowl With The Injury," I Had To Say Yes, Reveals Navdeep Saini

Australia vs India: Navdeep Saini suffered a groin strain during the fourth Test match, but played till the end. 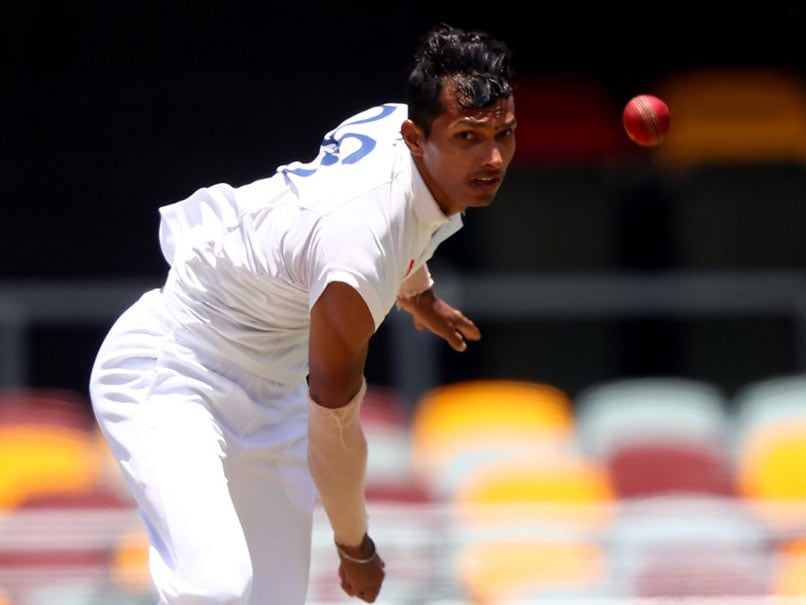 Navdeep Saini bowls a delivery during a 4th Test in Brisbane.© AFP

A groin strain prevented India pacer Navdeep Saini from giving his best in the Brisbane Test but fearing that he may not get such a big stage again, he remained at the beck and call of his captain and ended up bowling five overs despite injury. The 28-year-old, who finally made his Test debut in the Australia series after years of wait, said he risked aggravating his injury by bowling in the second innings but given what was at stake, "it was a no brainer".

"Ajinkya bhaiya asked me If I would be able to bowl with the injury, I just had to say yes," Saini, who was in the middle when Rishabh Pant hit the winning runs at the Gabba, told PTI.

Having taken four wickets in his debut game at Sydney, Saini suffered a groin strain in Australia's first innings and could bowl only 7.5 overs at the Gabba, increasing concerns for an already injury-hit India, who were forced to go into the game with a bowling attack which had the combined experience of four games.

For someone who made a massive leap of playing Ranji Trophy for Delhi in 2013 straight from making a quick buck in tennis ball cricket across Haryana, Saini wondered about the timing of his injury as he had just realised his dream of playing Tests.

But the like of the rest of his teammates, he showed a steely resolve and carried on.

"I was fine and suddenly I got injured. I was wondering "why it is happening in such a crucial game and have got the opportunity to play after a long time".

"I just wished if could keep going with that injury and support my team. I knew I might not get a stage like that again. Captain asked me if I could do it. I was in pain but said I would do with whatever I could.

"I am recovering now and should be fit soon," said the lanky fast bowler from Karnal who was fast tracked into first-class cricket by former India opener Gautam Gambhir and received his maiden Test call-up in back in 2018.

Saini, who has also played 10 T20 Internationals and seven ODIs, is not part of India's squad for the first two home Tests against England starting February 5 in Chennai.

Out of his four Test wickets, the first one was most special as he trapped another debutant, Will Pucovski, in front of the stumps with a full and fast incoming delivery.

"All wickets were special but yes you can't forget the first one. Because until that happens, you keep thinking about that first wicket."

With senior bowlers like Mohammad Shami and Umesh Yadav out of the series, the pressure to perform instantly had increased on the likes of Saini, who had not played Tests before but had a substantial experience of playing IPL and shorter formats for India.

Having not bowled with red-ball in Australia ever prior to the series, Saini said it was an enriching experience.

"It is easy to get excited in Australia with the bounce on offer. It is natural to think about bowling short balls then but Test cricket is not only about that, it is about patience and bowling in the same channel consistently.

"To be able to do well in Australia, you have to be mentally very strong, they don't give up till the every end. The management was very supportive including the captain and Rohit bhaiya. They all told me to bowl the way I would bowl in Ranji Trophy," said Saini, who is back home after five long months in the world of bio-bubbles.

Mohammed Siraj, the find of Australia tour in coach Ravi Shastri's words, was seen counselling Saini consistently in the latter's maiden Test. It helped the Delhi pacer immensely as he and Siraj go back a long way.

"He is one of my best mates. We have played a lot together (for India A). We talk a lot about bowling. He was always there for me in the first game. Pace is important but he was telling me to also focus on line and length to be effective.

"Siraj is a very different bowler. He showed a lot of courage by staying back after his father's death. What he achieved was very crucial for the team and showed his character."

Talking about his extraordinary journey, Saini, son of a bus driver, said he never planned to be a professional cricketer, it was only fate at play.

"I played with tennis ball for the major part of my growing up years. It all started when I played Ranji trophy. That is when I felt I could play professionally. Before that I was just playing without an aim, I had no idea. It all happened step by step after I played for Delhi," added Saini.

Ajinkya Rahane Australia vs India 2020-21 Cricket
Get the latest updates on IPL Auction 2023 and check out  IPL 2023 and Live Cricket Score. Like us on Facebook or follow us on Twitter for more sports updates. You can also download the NDTV Cricket app for Android or iOS.