Australia vs India: With Umesh Yadav injured, India have to choose between Navdeep Saini, Shardul Thakur and T Natarajan as their third pacer at the SCG. 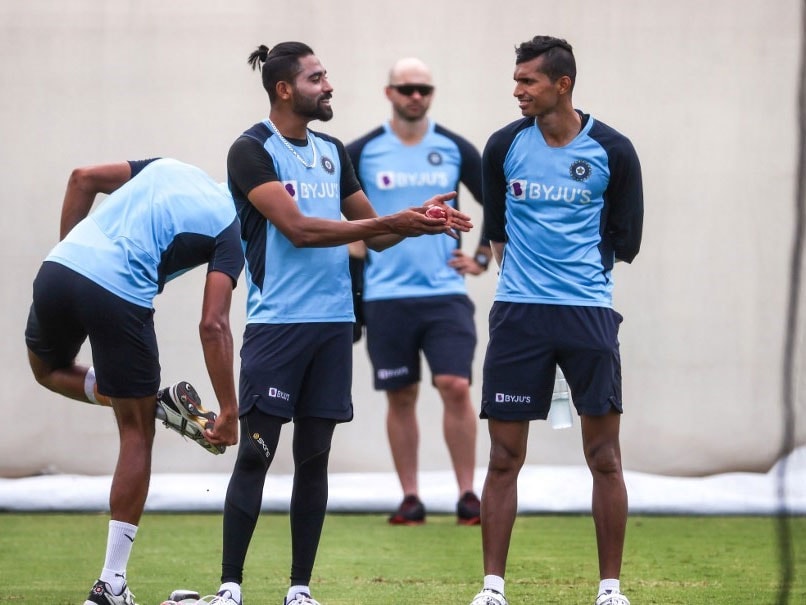 Former India pacer Ashish Nehra believes that Navdeep Saini should be the "first choice" for the third fast bowler's slot in the upcoming third Test against Australia because of his extra pace and ability to extract disconcerting bounce. While Shardul Thakur and T Natarajan are also in contention, the former left-arm pacer feels the selection of Saini for the Sydney Test, starting Thursday, is a no-brainer if one goes by pure cricketing logic. "If you look at squad composition, Saini was first choice and Shardul and Natarajan both came in as replacements for Mohammed Shami and Umesh Yadav," Nehra told PTI on Tuesday.

"So if Saini was ahead of them during initial Test squad selection, I don't see any reason why he would slip down in the pecking order. You selected him first, so obviously you believed he was better than other two, isn't it," Nehra, known for his plain speaking, said.

But don't you think Saini's indifferent show in two white-ball games before he suffered a niggle should count?

"By that logic, then KL Rahul (now injured) should have opened in first two Tests. It doesn't happen like that," the 42-year-old said.

Then he gave his points as to why Saini would be better suited for Sydney.

"Navdeep's biggest assets are bounce and extra pace. This is a Test match. How does Natarajan normally gets his wickets? When people are trying to hit him. Also, you haven't tested Natarajan by playing him for India A like you did with Mohammed Siraj, who has risen through the ranks," said Nehra.

"Similarly, Navdeep has also come up the ranks having been on multiple red ball tours of India A. In Test matches, batsmen normally don't get out. You have to get them out. That's the difference."

The white-ball games that were held in Sydney indicated that the deck was a flat one and express pace comes in handy on such surfaces.

"On Sydney pitch, you will require a bit more pace and Navdeep has that. There shouldn't be any debate as such. Sydney pitches what I saw during white ball games, it was very flat."

"So when kookaburra seam will flatten out after some time, you will require that extra pace that Navdeep has and also he can get a bit of reverse swing," said one of his India's finest exponents of swing bowling in the past decade.

The other factor is the current Australian team's inability to play short-pitched bowling.

"Also this Australian team is susceptible to short-pitched bowling, unlike a Matthew Hayden or Ricky Ponting of yesteryears. Navdeep can be used better as he bowls a mean bouncer compared to a Natarajan or Shardul."

Nehra was practical in his assessment.

"I am not saying by any stretch that Navdeep is India's No 1 bowler. He needs to improve a lot. Saini is not 145 to 150 kmph bowler like Shoaib Akhtar or a Brett Lee. That too, they bowled that speed may be for three to four seasons."

"Navdeep's average speed is around 140 but out of the three, Navdeep is best suited to play the Sydney Test match."

For Nehra, "someone bowling between 135 to 140 with better length and control is a far better proposition than one bowling at 148-150 kmph but is wayward."

As far as Natarajan is concerned, Nehra believes that the Tamil Nadu yorker sensation will do well not only in T20 Internationals but also in 50 over format as he plays regularly.

"If you do well in IPL, you then get a basic idea of what could get you success in T20Is and if you can work hard after being fast-tracked, you can do well in ODIs also where you need a few more skills as the duration is longer."

"Natarajan will be a good white-ball bowler with his variations going forward in T20 as well as 50 over cricket," he said.

Ashish Nehra Navdeep Saini Mohammed Siraj Shardul Thakur T Natarajan Cricket
Get the latest updates on IND vs NZ 2021, check out the Schedule and Live Score . Like us on Facebook or follow us on Twitter for more sports updates. You can also download the NDTV Cricket app for Android or iOS.