India vs Australia: Ravindra Jadeja came in handy for the visitors in the first T20I, scoring 44 runs from 23 deliveries, in a victory. 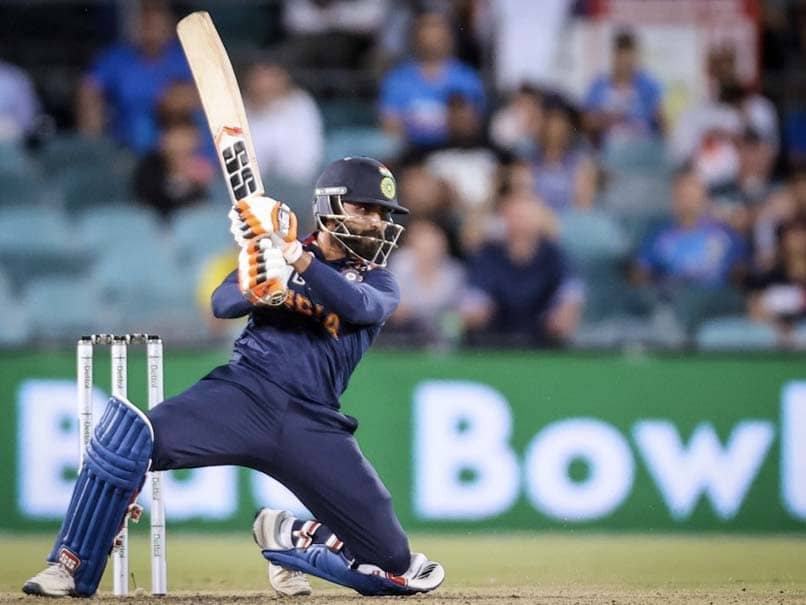 India vs Australia: Ravindra Jadeja hits a boundary during the first T20I.© AFP

Former India cricketer and Delhi Capitals assistant coach Mohammad Kaif feels Ravindra Jadeja is "grossly underrated" and Team India will miss the all-rounder after he was ruled of the remaining two T20I matches on Friday. Kaif feels Jadeja, who provides much-needed balance to the side, has proved his importance in the limited-overs fixtures and Team India will miss the all-rounder in the upcoming games. "For two successive games, Ravindra Jadeja showed why he is of so much value to India in white-ball cricket as he provides much needed balance. Even after 11 years he continues to be grossly underrated and deserves a lot more respect than he gets. Feel India will miss him dearly," Kaif tweeted.

After witnessing a slow start, it was Jadeja's cameo in the end which came in handy for India. Off the 34 runs that came in the last two overs, 33 were scored by the bowling all-rounder as he tore into the Australian bowling in the last two.

Jadeja played a spectacular knock to power India to a defendable 161/7 but was hit on the helmet in the final over of the innings and the BCCI medical team decided to assess the player before allowing him to get on with proceedings.

Spinner Yuzvendra Chahal took the field in the second innings of the opening T20I as a concussion substitute for Jadeja. The all-rounder was eventually ruled out of the T20I series and pacer Shardul Thakur was named as his replacement.

India made a winning start to the three-match T20I series as they beat Australia by 11 runs in the first T20I in Canberra on Friday. The second T20I between the two teams will be played at Sydney Cricket Ground on Sunday.

Ravindra Jadeja Australia vs India 2020-21 Australia vs India, 2nd T20I Cricket Mohammad Kaif
Get the latest updates on IPL 2021, IPL Points Table , IPL Schedule 2021 , live score . Like us on Facebook or follow us on Twitter for more sports updates. You can also download the NDTV Cricket app for Android or iOS.