Listen to the latest songs, only on JioSaavn.com
Aus Open, 2012
Sports Home
Story ProgressBack to home

World number one Caroline Wozniacki survived a second-set fightback from Georgia's Anna Tatishvili to reach the Australian Open's third round 6-1, 7-6 (7/4) on Wednesday. 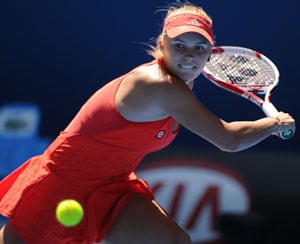 World number one Caroline Wozniacki survived a second-set fightback from Georgia's Anna Tatishvili to reach the Australian Open's third round 6-1, 7-6 (7/4) on Wednesday.

The top-seeded Dane looked headed for an easy win when she raced through the first set but she had to hang on against the free-hitting Tatishvili to win in 1hr 49min.

Wozniacki was pushed hard throughout the first set by Tatishvili, a player she has known since they were both 11 years old, and she never had it her own way despite the 6-1 scoreline.

"We played doubles together in juniors here once and I think we made the semi-finals -- she knows my game and I know hers," Wozniacki said.

Both women hit some ferocious ground strokes throughout the first set but Wozniacki's greater consistency proved decisive as she claimed the opener in 28 minutes.

The second set was a different story, however, as Tatishvili cut down her error-rate and began to pressure the world number one.

Wozniacki dropped serve in the fourth game and only just managed to hang on two games later to stop Tatishvili opening a 5-1 lead.

The top seed broke back to make it 4-2, but in the next game she was out-hit by the Georgian, who came from 15-40 down to break Wozniacki and move to 5-3.

But a poor service game from the world number 83 allowed the Dane back into the match and she took full advantage, fighting off a set point on her own serve to level the score at 5-5.

Both players held to send the set into a tiebreak and Wozniacki stepped up, opening a 5-2 lead and holding off the Georgian's late rally.

Comments
Topics mentioned in this article
Anna Tatishvili Tennis Caroline Wozniacki Australian Open 2012
Get the latest Cricket news, check out the India cricket schedule, Cricket live score . Like us on Facebook or follow us on Twitter for more sports updates. You can also download the NDTV Cricket app for Android or iOS.